Sharon Tate net worth: Sharon Tate was an American actress and model who had a net worth equal to $300 thousand at the time of her death (after adjusting for inflation). Sharon Tate was born in Dallas, Texas in January 1943 and passed away in August 1969. She appeared in many fashion magazines.

From 1963 to 1965 Tate had a recurring role in the television series The Beverly Hillbillies. She starred in the movies Barabbas, Adventures of a Young Man, The Americanization of Emily, Eye of the Devil, Don't Make Waves, The Fearless Vampire Killers, Valley of the Dolls, The Wrecking Crew, and Twelve Plus One. Tate also appeared in episodes of the TV series Mister Ed and The Man from U.N.C.L.E. In 1968 she was nominated for a Golden Globe Award for Most Promising Newcomer – Female for Valley of the Dolls. Sharon married director and actor Roman Polanski in 1968. On August 9, 1969 Sharon Tate was brutally murdered by a group known as the Manson Family while she was eight and a half months pregnant with a son. Court documents would reveal the value of Sharon's estate at the time of her death was $45,400. That's the same as around $300,000 in today's dollars. Since she died without a will, her estate was equally divided between her husband, two sisters and parents. 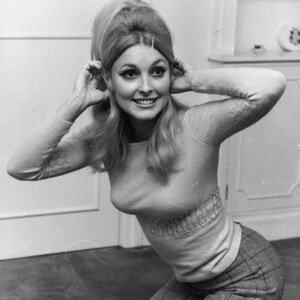