How much is Shantel Jackson Worth?

Shantel Jackson net worth: Shantel Jackson is a model and aspiring actress who has a net worth of $3 million. Shantel was born in Miami, Florida as a middle child in a house with five children. She attended a technical arts high school where she studied Entertainment Technology and learned the ins and outs of the entertainment business, both as an actress and behind the camera. She went on to study acting and psychology at Miami Dade and the University of Miami. In addition to her work as a model and an actress, Jackson also has been designing clothing and has created a number of fashionable pieces since high school. She is currently working on a unisex clothing line and has appeared in shows like Ridiculousness. She played the role of "Tanisha" in the film, Freelancers. Jackson may be best known as the girlfriend of boxing champion, Floyd Mayweather. Mayweather is a five-division world champion, who has won multiple world titles and the lineal championship in three different weight classes. Mayweather is a two-time Ring Magazine "Fighter of the Year" (winning the award in 1998 and 2007). He also won the Boxing Writers Association of America (BWAA) "Fighter of the Year" award in 2007 and the "Best Fighter ESPY Award" in 2007, 2008, 2010, 2012 and 2013. Jackson and Mayweather met in Atlanta and were together for roughly seven years. They had a four-year engagement before recently having a very public breakup. In March 2019, Shantel Jackson sued Mayweather for allegedly stealing $3 million worth of jewelry and other items. Shantel has also dated the rapper Nelly. 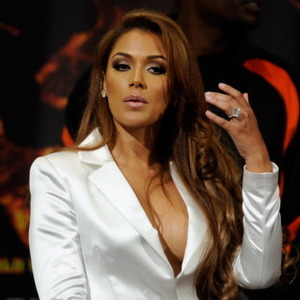