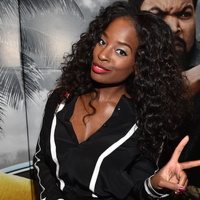 Shamea Morton net worth: Shamea Morton is an American television personality who has a net worth of $2 million. Shamea Morton is best known for appearing on the hit Bravo reality series, The Real Housewives of Atlanta, and for her years as a cheerleader for both the Atlanta Falcons & Atlanta Hawks. As a child, she started performing at a young age, and was part of several hip hop groups and musical ensembles. She studied Broadcast Journalism at Morris Brown College, holds adual degree in Psychology and Sociology from Georgia State University, which hasserved her well in her acting career. Morton's big break came in 2002 when she appeared in the critically hailed film Drumline alongside Zoe Saldana's character. But before she landed that job, the former "Miss Southwest DeKalb" had minor stints on network television and the small stage including BJ Hughes of the Alliance Theater's play Olympic Village and Elaine Hicks' Illusions. From those performances, Morton earned a principle role in the celebrated independent film Lesson Before Love which proved to be a pivotal point in her career. Recently, Morton was named the official game host of the Women's National Basketball Association's (WNBA) Atlanta Dream. She is also very active in radio, filling in as an on-air personality alongside Ryan Cameron of "The Ryan Cameron Morning Show" on Atlanta's V-103.