Seth Gilliam Net Worth: Seth Gilliam is an American actor who has a net worth of $1.5 million. Born in 1968, Gilliam earned his degree at the state University of New York at Purchase in 1990. He made his first foray into acting with an appearance on "The Cosby Show" in 1990.

Gilliam appeared on "Law & Order" before landing the recurring role of Clayton Hughes on "Oz". In 2002, he landed the role of Ellis Carver on HBO's "The Wire". Nearly a decade later, he played Dr. Alan Deaton in close to 30 episodes of "Teen Wolf". Gilliams' other TV credits include "Law & Order: Trial by Jury", "Law & Order: Criminal Intent", "Damages", "CSI: Miami", "Nurse Jackie", "The Good Wife", "Svetlana", "Person of Internet", "Homeland", and "Criminal Minds". He landed the recurring role of Gabriel Stokes on the fifth season of the AMC hit zombie series "The Walking Dead". Gilliam made his film debut in the early '90s and has since appeared in dozens of movies, including "Assault at West Point: The Court Martial of Johnson Whittaker", "Jefferson in Paris", "Personal Velocity: Three Portraits", "The Great Wonderful", "Did You Hear About the Morgans?", "Stake Out: Atlantic Salmon", and "The People v. Leo Frank". 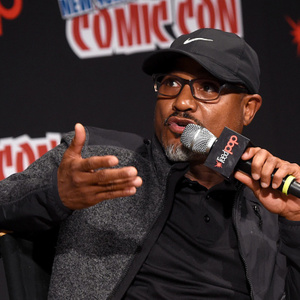