Scott Asheton Net Worth: Scott Asheton was an American musician who had a net worth of $2 million. Scott Asheton was born in Washington, D.C. in August 1949 and passed away in March 2014. Asheton was best known for being the drummer for the rock band the Stooges. He formed the band in 1967 with his older brother Ron Asheton, Dave Alexander, and Iggy Pop.

The Stooges are credited as being instrumental to the risk of punk rock music and also influenced the genres of alternative rock and heavy metal. They often performed for hostile or indifferent audiences during their time. During their first incarnation the band released three albums including their self-titled debut studio album in 1969. The band's first and third albums were certified Silver in the UK. The band was ranked #78 by Rolling Stone on their list of the 100 greatest artists of all time in 2004. They were inducted into the Rock and Roll Hall of Fame in 2010. Asheton also played drums for Sonic's Rendezvous Band and played on four studio albums for Sonny Vincent. The Stooges reformed in 2003 and released an album in 2007. His Ron who played guitar passed away in 2009 and Scott and Iggy remained the only original members. Scott Asheton passed away on March 15, 2014 at the age of 64 from a heart attack. 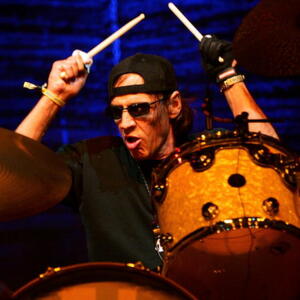