Sarah Wright net worth and salary: Sarah Wright is an American actress and former fashion model who has a net worth of $6 million. Sarah Wright was born in Louisville, Kentucky in September 1983. She started acting as a child and modeling at 14. Wright was discovered by organizers of the Mossimo model search contest in 1999.

She first appeared in the 1998 movie Enchanted and then starred as Paige Chase from 2004 to 2005 in the television series Quintuplets. In 2006 Wright starred as Lizzy in the TV series The Loop. She starred as Jane in the series 7th Heaven from 2006 to 2007. In 2011 Wright starred as Tiffany in the TV series Mad Love. From 2011 to 2013 she played the recurring role of Millicent Gergich in the television series Parks and Recreation. Since 2014 she has starred in the TV series Marry Me as Dennah. Wright also had recurring roles in the television series Men at Work in 2013 and Mixology in 2014. She has starred in the movies Made of Honor, The House Bunny, Touchback, Celeste and Jesse Forever, 21 & Over, Walk of Shame, American Made and many others. Sarah married actor Eric Christian Olsen in 2012 and had their first child in 2013 and their second in 2016. 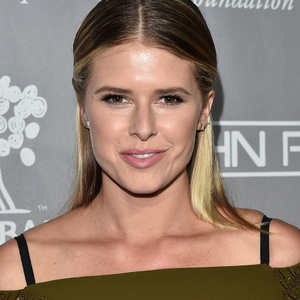