Sarah Gadon Net Worth: Sarah Gadon is a Canadian actress who has a net worth of $1 million. Born April 4, 1987 in Toronto, Ontario, Canada, she made her acting debut in 1998, initially making guest appearances in shows such as La Femme Nikita, Are You Afraid of the Dark?, Mutant X and Doc and Life with Derek.

She made her film debut in 2003's Fast Food Nation, although she had already starred in several television movies, including Cadet Kelly (starring Hillary Duff). She has held regular roles in such series as The Border and Being Erica, and also lent her voice to two animated series, Ruby Gloom and Total Drama Island. She was nominated for the Young Artist Award for Best Ensemble in a TV movie for her first film, The Other Me (2000). Her other filmography credits include both feature length and short films. She portrayed Margaret in the dark comedy Siblings, Priscilla in Charlie Bartlett (2007) and Laura in Leslie, My Name is Evil (2009). Her short film work includes Haley in Burgeon and Fade (2007), Julia in Grange Avenue (2008) and Gabrielle in Spoliation (2008). Burgeon and Fade won the Special Jury Award at the WorldFest Houston Festival for original dramatic short film. She also starred as Madison in the short indie film, The Origin of Teddy Bears. Gadon was cast in the David Cronenberg film A Dangerous Method where she played Emma Jung, Carl Jung's wife (Carl Jung, often referred to as C.G. Jung, was a noted Swiss psychiatrist and psychotherapist who founded analytical psychology). She starred in Cronenberg's Cosmopolis, alongside Robert Pattinson (famed for the Twilight saga franchise), as his on-screen wife of 22 days, Elise Shifirin. She was cast in the television adaptation of Ken Follett's global bestseller World Without End (an eight-hour event series). 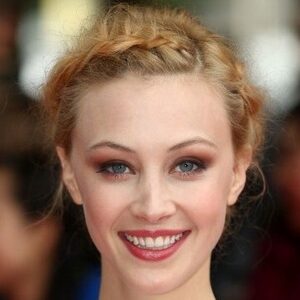