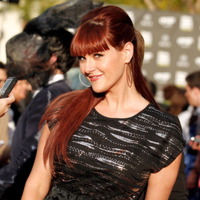 Sara Rue Net Worth: Sara Rue is an American actress who has a net worth of $1 million. Born Sara Schlackman on January 26, 1979 in New York City, New York, she made her television series debut in 1990 on the NBC sitcom Grand, portraying the well-adjusted and self-possessed daughter of a single mother (Pamela Reed). She made her film debut in Rocket Gibraltar as Jessica Hanson (1988). Between 1988 and 2012, she appeared in such television productions as Roseanne, Blossom, ER, Chicago Hope, The Simple Life, Zoe, Duncan, Jack & Jane, Will & Grace, Less than Perfect, Two and a Half Men, The Big Bang Theory, Private Practice, Rules of Engagement, Psych, Malibu County and many more. On the big screen, Rue went from stealing scenes as the ranting activist Earth Girl in the teen comedy Can't Hardly Wait (1998) to holding her own in the dramas A Slipping Down Life and A Map of the World. She was featured as a nurse in the 2001 summer blockbuster Pearl Harbor and later that year starred in her first feature debut in Gypsy 83, playing a young woman who idolized iconic and eccentric pop-rocker Stevie Nicks. In 2002, Rue was cast as Claude, a newbie in the world of corporate ladder-climbing and also in the ABC sitcom Less Than Perfect. Rue fit right in with her co-stars of Less Than Perfect and the show was renewed after delivering moderate ratings. Rue married director/writer/producer Mischa Livingstone in 2001 and the couple divorced in 2007. On May 21, 2011, Rue married teacher Kevin Price in a traditional Jewish wedding (Rue is Jewish) and she gave birth to her first child, daughter Talulah Rue Price, on February 9, 2013.