What is Sara Gilbert's Net Worth and Salary?

Sara Gilbert is an American actress, writer, director, and TV producer who has a net worth of $30 million. She first became famous as an actress on the ABC series "Roseanne," which originally aired from 1988 to 1997. She reprised the role of Darlene Conner in the 2018 reboot as well as the spin-off "The Conners."

Sara Gilbert was born Sara Rebecca Abeles on January 29, 1975, in Santa Monica, California. Her parents, Barbara and Harold, are both Jewish, and her maternal grandfather was Harry Crane, the creator of "The Honeymooners." Sara has four half-siblings, two on her father's side (Joseph and Patrice) and two on her mother's side ("Little House on the Prairie" stars Melissa and Jonathan Gilbert). In 1984, Sara began using the last name Gilbert, and she decided she wanted to become an actress at age 6 when Melissa was honored with a star on the Hollywood Walk of Fame. Sara attended Yale University and graduated with honors in 1997, earning a B.A. degree in art with a concentration in photography.

Gilbert made her television debut in the 1984 TV movie "Calamity Jane," and in 1988, she appeared in the "Runaway Ralph" episode of "ABC Weekend Special" and landed the role that would make her a star: Darlene Conner on "Roseanne." Between the original run and the reboot, "Roseanne" aired 231 episodes over 10 seasons, and after the reboot was cancelled due to a racist tweet from star Roseanne Barr, ABC developed the spin-off "The Connors." While starring on the original run of "Roseanne," Sara co-starred with Drew Barrymore in 1992's "Poison Ivy," appeared in the 1994 film "Dead Beat," hosted "Saturday Night Live" (1994), lent her voice to a 1992 episode of "The Simpsons," and won a Young Artist Award for the 1990 television film "Sudie and Simpson." She appeared in the 1999 films "Desert Blue" and "Light It Up," and in 2000, she was cast as Amy Manning on the CBS sitcom "Welcome to New York." That year Gilbert also co-starred with John Cusack and Jack Black in "High Fidelity" and appeared in the Craig Ferguson film "The Big Tease."

While co-hosting "The Talk," Sara played Irene Dudek on the 2014 CBS comedy "Bad Teacher," guest-starred on "The Millers" (2013), "Web Therapy" (2013), "Supergirl" (2016), and "Jane the Virgin" (2018), appeared in six episodes of the CBS series "Living Biblically" (2018), and starred on "Roseanne" and "The Conners." Gilbert left "The Talk" in August 2019, and when she announced her departure a few months prior, she stated, "I think my life was slightly out of balance and I wasn't able to spend as much time with my three kids as I'd like, and time for myself. And as I've continued on, I'm starting to develop more things to produce and I'm having opportunities to act, and I'm just feeling like I don't know how I'm going to do it…but it's difficult because this is a place that I love and a place where I'm extremely happy."

Going into the third season of "The Conners," Sara's per episode salary was raised to $400,000. That works out to $8 million per 20 episode season. 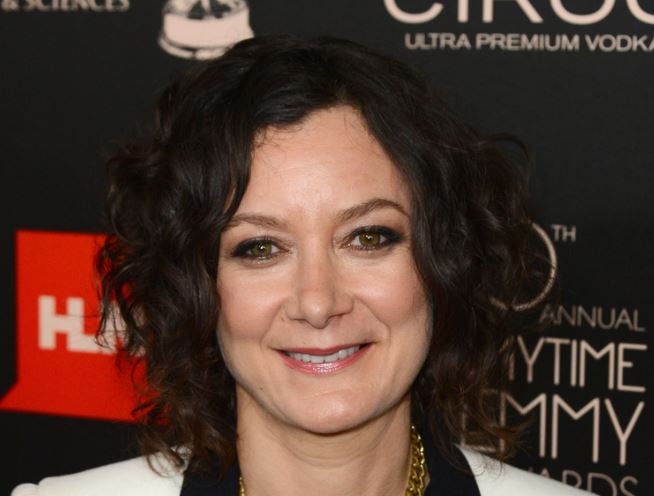 During her teenage years, Sara was in a relationship with her "Roseanne" co-star Johnny Galecki. She has said that she realized she was a lesbian during the relationship and that Galecki was "super sweet about it" and never told anyone about Gilbert's sexuality. Sara didn't publicly speak about her sexuality until she launched "The Talk" in 2010.

In 2001 Sara began a relationship with TV producer Ali Adler, co-creator of "Supergirl, The New Normal". They welcomed son Levi in October 2004 and daughter Sawyer in August 2007. Adler gave birth to Levi and Gilbert gave birth to Sawyer. Sara and Ali split up in 2011.

In April 2013 Gilbert became engaged to songwriter/music producer Linda Perry, who was formerly the lead vocalist of the band 4 Non Blondes. They married on March 30, 2014, and Sara gave birth to a son, Rhodes, in February 2015. She filed for legal separation from Linda in December 2019.

Gilbert earned Primetime Emmy nominations for Outstanding Supporting Actress in a Comedy Series for "Roseanne" in 1993 and 1994. She has won four Young Artist Awards: Outstanding Young Comedienne in a Television Series for "Roseanne" in 1991, 1992, and 1993 and Best Young Actress in a Cable Special for "Sudie and Simpson" in 1991. The cast of "Roseanne" won an Innovator Award at the 2008 TV Land Awards, and two years prior, Sara was nominated for Character Most Desperately in Need of a Timeout for the series. "Roseanne" also earned her an American Television Award nomination for Best Supporting Actress in a Situation Comedy (1993). Gilbert has been nominated for 11 Daytime Emmys for "The Talk," winning Outstanding Entertainment Talk Show Host (shared with Julie Chen, Sharon Osbourne, Aisha Tyler, and Sheryl Underwood) in 2017 and Outstanding Talk Show/Entertainment in 2016 and 2018. She was presented with a Humanitarian Award at the 2009 LA Femme International Film Festival, and she earned a Film Independent Spirit Award nomination for Best Supporting Female for "Poison Ivy" in 1993 and a Gold Derby Award nomination for Drama Guest Actress for "Grey's Anatomy" in 2010.

In 2016, Gilbert paid $6.85 million for a 6,100 square foot, six-bedroom mansion in the Hancock Park area of Los Angeles. When she purchased the home, Sara and Linda owned a $3.5 million home on the Sunset Strip, which they'd lived in since 2012. Gilbert previously owned a Beverly Hills home, which she sold to actress Penelope Cruz for $3.3 million. 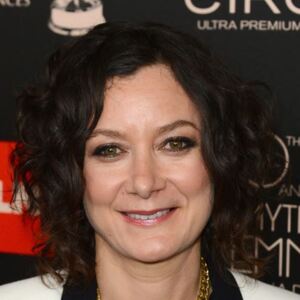