What is Sandra Bullock's Net Worth and Salary?

Sandra Bullock is a Virginia-born actress and producer who has a net worth of $250 million. After moving to Los Angeles, Bullock maintained a steady roster of small roles until landing a major part in 1993's Demolition Man opposite Sylvester Stallone and Wesley Snipes. The following year, Bullock co-starred opposite Keanu Reeves in Speed, which grossed $350.4 million worldwide. Bullock's career exploded overnight into the stratosphere, where it has remained ever since.

Sandra Annette Bullock was born in Arlington, Virginia, on July 26, 1964. She is the daughter of an American voice coach and Army employee, John W. Bullock, and a German opera singer, Helga Mathilde Meyer. Sandra spent a good portion of her youth singing in a choir in Nuremberg, Germany where her father was stationed and in charge of the Army's Military Postal Service. This is where her father and mother had met and gotten married. She was raised for the first decade of her life in Nuremberg, Viena, and Salzburg. The family returned to Arlington when Sandra was around 12, and her father became a contractor for The Pentagon. Bullock attended Washington-Lee High School, where she was a cheerleader and participated in school plays. She graduated in 1982 and went to East Carolina University in Greenville, North Carolina. She got a BFA in Drama in 1987.

To pursue a career in acting, Bullock moved to New York City after college where she worked, attended acting classes and went on auditions, taking roles for the stage and student films. She worked as a bartender, cocktail waitress, and coat checker to pay the bills while auditioning for various roles. She also took acting classes with Sanford Meisner.

After moving to Los Angeles, Bullock maintained a steady roster of small roles. Director Alan J. Levi was impressed by her performance in an Off-Broadway play he had seen and offered her a part in the 1989 made for TV film Bionic Showdown: The Six Million Dollar Man and the Bionic Woman.

This led to the exposure that secured her many small roles in several small films (and the NBC television version of the film Working Girl in 1990), until she landed a major part in 1993's Demolition Man opposite Sylvester Stallone and Wesley Snipes.

The following year, Bullock co-starred as Annie Porter opposite Keanu Reeves in the smash hit blockbuster Speed, which grossed $350.4 million worldwide. With her breakout performance, Bullock's career exploded overnight into the stratosphere.

After Speed, Sandra's career was established as a Hollywood leading actress. Many high profile roles in highly successful and diverse films followed including While You Were Sleeping ($182 million worldwide, and earned her a Golden Globe Nomination), A Time to Kill ($152.2 million worldwide), Miss Congeniality ($212.7 million worldwide), and Two Weeks Notice ($199 million worldwide). She also starred in 1995's The Net as a computer programmer who stumbles upon a conspiracy. Critics raved about her performance and The Net brought in $110.6 million in the U.S. 1997 saw Bullock reprising her role in Speed 2: Cruise Control. She later stated that she regretted making the sequel. In 1998, Bullock produced and starred in Hope Floats, which made $81.4 million USD. That same year, she starred in Practical Magic with Nicole Kidman; while today it might be considered by some to be a cult classic, it flopped at the box office.

Bullock won critical praise for her supporting role in the 2005 film Crash, which earned three Academy Awards. Bullock's 2013 drama Gravity is her highest grossing leading film to date, bringing in $700 million at the worldwide box office. Her 2009 feature, The Blind Side, earned roughly $309 million in worldwide box office earnings and garnered Bullock a Golden Globe Award, a Screen Actors Guild Award and an Academy Award for best actress. That same year, she also starred in The Proposal with Ryan Reynolds, which grossed $317 million at the box office. In 2013, Bullock starred as Dr. Ryan Stone in Gravity, which took in a whopping $716 million USD at the box office worldwide. She was nominated for several awards, including the Oscar for Best Actress. In 2015, Bullock voiced the villain in the animated film Minions. Minions became her highest-grossing film to date, bringing in an astonishing $1.1 billion worldwide.

Bullock also runs Fortis Films and was the executive producer for The George Lopez Show.

Sandra was once engaged to Tate Donavon. They were together for three years. Sandra was married to West Coast Choppers founder Jesse James. They married on July 16, 2005. In March 2010 James admitted to being unfaithful to Bullock with several women. Bullock filed for divorce on April 23, 2010 in Austin, Texas (where she started a couple of businesses). She has since adopted two children on her own.

Sandra is a very generous philanthropist. In addition to supporting other charities and organizations, she has long been supporting the American Red Cross by donating a total of at least $5 million dollars to the organization over the years.

In 2014, it was revealed that Sandra earned an astronomical paycheck for the film Gravity. Fresh off her Best Actress Oscar win, Sandra was able to ink a deal that guaranteed her $20 million plus 15% of Gravity's gross box office receipts as well as merchandise, TV deals and DVD sales. To date, Sandra has earned north of $70 million from Gravity. That's enough to be one of the largest paychecks for a single acting role in Hollywood history.

Sandra earned $500,000 for 1994's Speed. That's the same as around $900,000 today after adjusting for inflation. The following year she earned $250,000 for The Net. This salary was negotiated prior to the massive success of Speed. Finally able to capitalize on her popularity, Sandra earned $8 million for 1996's A Time To Kill. She earned $10.5 to reprise her role in Speed 2: Cruise Control. She made $20 million for The Blind Side, $15 million for Murder by Numbers, $17.5 million for Miss Congeniality 2, $10 million for Minions. Between 1994 and 2009 alone, she earned $150 million in salary. Thanks in large part to Gravity, she earned another $120 million between 2009 and 2019 in movie salary's alone bringing her total career haul to around $300 million when all bonuses are included. As an executive producer of the TV series George Lopez she earned at least $10 million.

In 2019 she listed a 3-acre property on an island in Georgia for $6.5 million. The property is actually NINE contiguous properties that feature 200 feet of beach frontage. She bought the properties in several transactions over 2001 and 2002 for a total of $4.5 million.

She owns more than a dozen properties in Texas, mainly around Austin.

Her primary residence is a mansion in Beverly Hills that she bought for $16.2 million in 2011. This property, which sits on 3.4 acres, is potentially worth $25-30 million. She owns two units in a nearby luxury tower and in March 2021 paid $2.7 million for a 2,800 square-foot nearby single family home.

Sandra owns a 5-acre mountain retreat in Jackson Hole, Wyoming, a $4 million townhouse in Manhattan and a $3 million Victorian mansion in New Orleans. 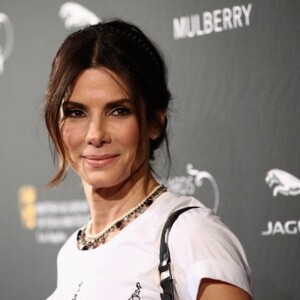