Sam Robards Net Worth: Sam Robards is an American actor who has a net worth of $4 million. Sam Robards was born in New York City, New York in December 1961. His parents were actors Jason Robards, Jr. and Lauren Bacall. Sam attended Sarah Lawrence College and the National Theater Institute at the Eugene O'Neill Theater Center.

He acted off-Broadway in a production of Album in 1980. Her debut screen role came in the movie Tempest in 1982. Sam appeared with his father in Bright Lights, Big City in 1988 and with his mother in 1993's Pret-a-Porter. In television he starred in the series TV 101 as Kevin Keegan from 1988 to 1989 and Get a Life as Larry Potter from 1990 to 1991. In 1998 he starred as Sheriff Gary Hammond in the series Maximum Bob and he had a recurring role in the series Spin City from 1998 to 1999 as Arthur. From 2004 to 2005 Sam started as Greg Brock in the series The West Wing. He starred as Howie "The Captain" Archibald in Gossip Girl from 2007 to 2012, Tim Feeny in Treme from 2012 to 2013, and Kyle Masterson since 2013 in the series Twisted. Robards has starred in the movies Casualties of War, The Ballad of Little Jo, Beautiful Girls, Dinner and Driving, American Beauty, Bounce, A.I. Artificial Intelligence, Surviving Eden, Marmalade, The Other Side of the Tracks, Perestroika, The Rebound, The Art of Getting By, and Grand Street. He was nominated for a Young Artist Award in 1983. Sam married Sidsel Jensen in 1997. He has three children and was previously married to Suzy Amis. 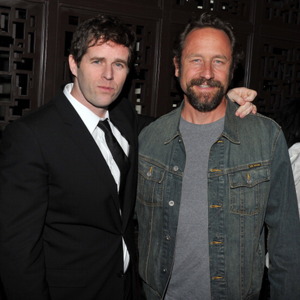