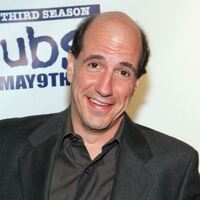 Sam Lloyd net worth and salary: Sam Lloyd was an American actor and musician who had a net worth of $600 thousand at the time of his death. Unfortunately Sam died on April 30, 2020 at the age of 56. One of his best known roles came starring as Ted on the television series Scrubs from 2001 to 2009.

Sam Lloyd was born in Weston, Vermont in November 1963. His uncle is Back to the Future actor Christopher Lloyd. Sam starred as Lance Armstrong on the TV series City in 1990. In 1995 he starred as Barkley on the series Double Rush. From 2004 to 2005 he had a recurring role as Dr. Albert Goldfine on the television series Desperate Housewives. From 2013 to 2015 he had a recurring role as Reverend Todd on the TV series The PET Squad Files. He has appeared in several films and episodes of other TV series including Rising Sun, Flubber, Galaxy Quest, The Brothers Solomon, Night Court, Matlock, Seinfeld, Coach, Mad About You, The Drew Carey Show, 3rd Rock from the Sun, Two Guys and a Girl, Spin City, NYPD Blue, The West Wing, Malcolm in the Middle, The Middle, Modern Family, and more. He is also a member of the a cappella group The Blanks.