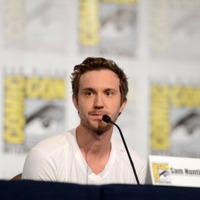 Sam Huntington Net Worth: Sam Huntington is an American actor who has a net worth of $2 million. Sam Huntington was born in Peterborough, New Hampshire in April 1982. He is best known for starring as Josh Levison in the television series Being Human. His great-uncle was the actor Ralph Bellamy and Huntington received his Academy Award for lifetime achievement when he passed away. Sam's first role came in the TV movie Harvest of Fire in 1996. In 1997 he starred in the film Jungle 2 Jungle and his TV series debut came in Law & Order in 1997. From 2007 to 2008 he starred as Andy Claybrook in the series Cavemen. Huntington's best known role is as werewolf Josh Levison in the SyFy series Being Human. He has starred in the movies Detroit Rock City, Not Another Teen Movie, Rolling Kansas, Home of Phobia, In Enemy Hands, Raising Genius, Sleepover, River's End, Superman Returns, Fanboys, Tug, Dylan Dog: Dead of Night, Three Night Stand, and the 2014 Veronica Mars movie. He has also appeared in episodes of CSI: Miami, CSI: NY, Veronica Mars, Human Target, Glenn Martin DDS, and Warehouse 13. Sam married actress Rachel Klein in 2006 and the couple has two children together.