Saffron Burrows net worth: Saffron Burrows is an English actress who has a net worth of $10 million dollars. Saffron Burrows was born in London, England, and began her career as a model after being discovered in a park by fashion photographer Beth Boldt. After a successful modeling career, she moved into film and television work in the early 90s. She went on to appear in such projects as "In the Name of the Father", "Circle of Friends", "Karaoke", "Cold Lazarus", "Crucial Takes", "Hotel de Love", "Nevada", "One Night Stand", "The Matchmaker", "Wing Commander", Deep Blue Sea", "Miss Julie", "Timecode", Gangster No 1″, "Enigma", "Tempted", "Hotel", "The Seventh Stream", "Frida", "Flashpoint", "Troy", "Klimt", "Perfect Creature", "Agatha Christie's Marple", "Reign Over Me", "The Bank Job", "Boston Legal", "My Own Worst Enemy", "Kings", "Law & Order: Criminal Intent", "Knife Fight", and "The Crazy Ones". Most recently, she recurred on the hit series, "Angels of S.H.I.E.L.D". 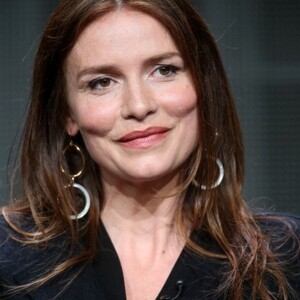