Rutger Hauer net worth and salary: Rutger Hauer was a Dutch actor and writer who had a net worth of $16 million at the time of his death. Rutger Hauer earned his net worth from a lifelong fruitful acting career, spanning from the late 1960s. Hauer was an electrician and a joiner before becoming a well-known actor.

His first role was in the Dutch medieval action drama, Floris. The 1969 popular TV series made him a famous actor in his native country and he went on to appear in the 1973 Dutch film Turkish Delight. He made his British film debut in the 1975 film The Wilby Conspiracy. The film wasn't a box office hit in America so Hauer returned to Dutch films. He made his American film debut in the 1981 film Nighthawks. From there, Hauer went on to appear in blockbusters, including Blade Runner (1982), Flesh & Blood (1985) and Ladyhawke (1985). By the 1990's Hauer was more involved in low-budget films. Despite his heavy involvment in independents films, Hauer continued to appear in regularly in English and American productions. He received a Golden Globe Award for Best Actor in the British TV film Escape for Sobibor. Towards the end of his life Hauer appeared in popular productions including Sin City, Batman Begins, Hobo with a Shotgun and True Blood. In 2013 Rutger was knighted in the Order of the Netherlands Lion. Rutger was an well-known environmentalist and AIDS activist. He founded an AIDS awareness called the Rutger Hauer Starfish Association. All the proceeds from his 2007 autobiography were donated to his foundation. Unfortunately, Rutger Hauer died on July 19, 2019 at the age of 75. 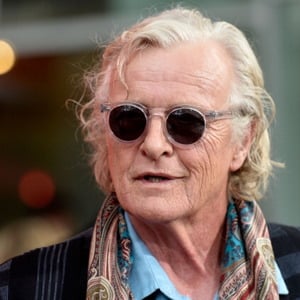