Ruby Dee net worth: Ruby Dee was an American actress, playwright, screenwriter, and activist, who had a net worth of $2.5 million dollars. Born in Cleveland, Ohio, Ruby Dee grew up in Harlem, New York, New York, and graduated from Hunter College with dual degrees in French and Spanish.

She first made a name for herself appearing in Broadway productions throughout the forties and fifties, before gaining widespread recognition for her work in the film, "The Jackie Robinson Story". Over the course of a nearly 80-year career, she has appeared in such films as, "Edge of the City", "A Raisin in the Sun", "Wattstax", "Jungle Fever", "The Stand" and "Politics of Love". Modern audiences probably would recognize Ruby from her role in the 2007 Ridley Scott movie "American Gangster". In the movie, Ruby Dee played the mother of Denzel Washington's character Frank Lucas. She is also a well-respected Civil Rights activist, and wrote a successful autobiography with her late husband, Ossie Davis. She has been nominated for eight Emmy Awards, and has won one. She also received an Academy Award nomination, and is a Kennedy Center honoree, among many, many other accolades. Ruby Dee died at her home in New Rochelle, New York on June 11, 2014. She was 91 years old. 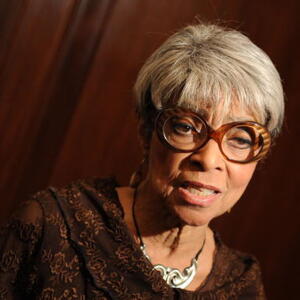