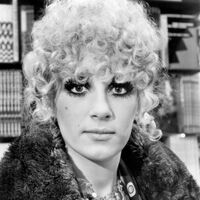 Roz Kelly net worth: Roz Kelly is an American actress who has a net worth of $150 thousand. She is best known for playing the role of Carol "Pinky" Tuscadero on the television series Happy Days.

Roz Kelly was born in Mount Vernon, New York in July 1943. Kelly first worked as a staff photographer for New York Magazine. She first appeared in the film Greetings in 1968. Kelly starred as Pinky Tuscadero in the TV series Happy Days in 1976. She also had recurring roles in the TV series Starsky and Hutch, Kojak, The Love Boat, Charlie's Angels, and Fantasy Island. Kelly starred in the movies Utterly Without Redeeming Social Value, The Owl and the Pussycat, You've Got to Walk It Like You Talk It or You'll Lose That Beat, Okay Bill, Everybody's at It, New Year's Evil, American Pop, and Full Moon High. In 2007 she was nominated for a TV Land Award for Break Up That Was So Bad It Was Good for Happy Days. Kelly was arrested in 1998 for firing a shotgun into her neighbor's window and again in 200 for hitting a man with her cane.