Roy Firestone net worth: Roy Firestone is an American sports commentator and journalist who has a net worth of $1.5 million. Roy Firestone was born in Miami Beach, Florida in December 1953. He graduated from the University of Miami and started his career at WTVJ in Miami. Firestone moved to Los Angeles, California and worked as a sports anchor for KCBS-TV from 1977 to 1985. He hosted the ESPN television series SportsLook from 1980 to 1990 which was later renamed Up Close. Firestone was a color commentator for Sunday Night Football in 1987. From 2013 to 2014 he was a sports analyst and commentator on the TV series Good Day L.A. He is the host of the HDNet series Face to Face with Roy Firestone as well as AOL's Time Out with Roy Firestone. Firestone voiced the role of Egghead in the 1988 movie Daffy Duck's Quackbusters. He has appeared in episodes of the TV series The New Hollywood Squares, In Living Color, Married with Children, Clueless, Arsenio, Everybody Loves Raymond, The Simpsons, Spin City, The New Odd Couple, Webster, Coach, Arli$$, and Yes, Dear. Firestone won a Cable Ace Award in 1987 for Sports Host of SportsLook. 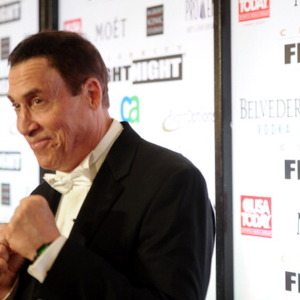