How much is Rosario Dawson Worth?

Early Life: Rosario Dawson was born Rosario Isabel Dawson on May 9, 1979, in New York City. Rosario's mother, Isabel Celeste, gave birth to her at the age of 16, and her biological father, Patrick C. Harris, wasn't in the picture. Isabel married construction worker Greg Dawson when Rosario was a year old, and they gave her a half-brother, Clay, three years later. When Dawson was 6, her family became squatters in an abandoned East Village apartment, and she later lived in Texas, graduating from Garland High School. Rosario also attended the prestigious Lee Strasberg Institute.

Philanthropy: Dawson is an active supporter of several charities, including Parents, Families and Friends of Lesbians and Gays, the Lower East Side Girls Club, Amnesty International, Oxfam, and Voto Latino. She has served as a spokeswoman for Doctors Without Borders, Conservation International, Save The Children, National Geographic Society, The Nature Conservancy, and More Than Footprints. In 2012, she teamed up with SodaStream International to spread the word about reducing the use of bottles and cans as part of their Unbottle the World Day campaign, and she has been a member of the board of directors for Scenarios USA and V-Day.

Personal Life: Rosario, who identifies as a member of the LGBT community, has reportedly dated actor Jason Lewis, director Danny Boyle, and comedian Eric Andre. She began a relationship with Senator Cory Booker in the fall of 2018 and drove across the country to move into his Newark, New Jersey, during the summer of 2020. Dawson has a daughter, Lola, who she adopted in 2014 when Lola was 12 years old. In 2004, Rosario was arrested during a protest against President George W. Bush and again in 2016 during a Democracy Spring sit-in on Capital Hill. She has supported Barack Obama and Bernie Sanders, and she endorsed Booker during his campaign for the 2020 presidential election.

In October 2019, a trans man named Dedrek Finley filed a civil suit against Dawson and her mother. Finley, who has known the family for 20 years and had been hired to do construction work for them, stated that they "violated [his] civil and labor rights, intentionally misgendered and deadnamed him, and assaulted him while yelling transphobic insults." The Dawsons have called the allegations "false and baseless."

Awards and Nominations: Rosario was honored with the Community Service Award at the 2013 ALMA Awards, and the following year, she shared a Special Achievement in Film award for "Cesar Chavez" with Diego Luna, Michael Peña and America Ferrera. She won the Rising Star Award at the 2004 American Black Film Festival and earned an NAACP Image Award for Outstanding Actress in a Motion Picture for "Seven Pounds" in 2009. Dawson won a BTVA People's Choice Voice Acting Award for "The Lego Batman Movie" at the 2018 Behind the Voice Actors Awards, and she received a Satellite Award for Outstanding Actress in a Supporting Role, Comedy or Musical and a ShoWest Award for Supporting Actress of the Year for "Rent." Rosario won a Streamy Award for Best Female Actor in a Dramatic Web Series for "Gemini Division" in 2009 and an Acting and Activism Award from the Women Film Critics Circle Awards in 2014, and the cast of "A Guide to Recognizing Your Saints" received a Special Jury Prize at the 2006 Sundance Film Festival. Dawson has also earned nominations from the BET Awards, Black Reel Awards, Broadcast Film Critics Association Awards, Imagen Foundation Awards, MTV Movie + TV Awards, Scream Awards, and Teen Choice Awards. 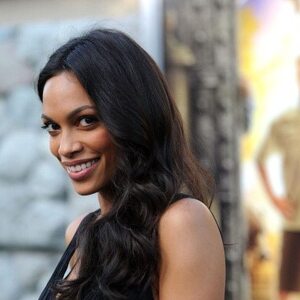