Rory McCann Net Worth and salary: Rory McCann is a Scottish actor who has a net worth of $6 million. McCann is best known for playing the role of Sandor "The Hound" Clegane on the HBO original TV series Game of Thrones, based on the series of fantasy novels by George R.R. Martin.

Rory McCann was born in Glasgow, Scotland in April of 1969.  Before falling into his signature role on television, Rory studied forestry and also worked such jobs as a bridge painter, a carpenter, and a landscape gardener. His acting career began when he appeared in an advertisement for Scott's Porage Oats. Proper acting roles were soon to follow, and his first real break came in the 1999 film Ratcatcher and the TV movie Coming Soon. In 2000 he starred in the movie Pasty Faces and from 2002 to 2003 he starred as Kenny McLeod in the TV series The Book Group. In 2003 he starred in the movies The Devil's Tattoo and Young Adam and the TV series Rockface. McCann can also be seen in the films Alexander, Beowulf & Grendel, Sixty Six, Hot Fuzz, The Crew, Solomon Kane, Clash of the Titans, and Season of the Witch. In 2011 he had a recurring role in the series The Jury II.

His best known role is as Sandor "The Hound" Clegane since 2011 on the HBO drama television series Game of Thrones. For his work on Game of Thrones, McCann won a BAFTA Scotland Award for Best Television Performance for The Book Group in 2002. He has also been nominated for two Screen Actors Guild Awards for Outstanding Performance by an Ensemble in a Drama Series for Game of Thrones as well. Off camera, he lives a solitary transient lifestyle and was formerly the leader of the band Thundersoup. Rory had a near fatal rock climbing accident back in 1990. 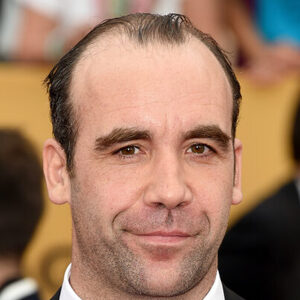