Ronnie Corbett net worth: Ronald Balfour "Ronnie" Corbett was a Scottish actor and comedian who had a net worth of $10 million at the time of his death in 2016. He was long associated with Ronnie Barker in the television comedy series, The Two Ronnies, and worked in film and television since the 1950s.

Corbett was born in Edinburgh in 1930. He was one of three children. He was educated at the Royal High School, but did not attend university, instead deciding to pursue his career in acting. He appeared in several films including Rockets Galore!, Casino Royale (the original version in 1967), Some Will, Some Won't, and No Sex Please, We're British. In the late 60s he met Ronnie Barker, and the pair instantly bonded. They created a television show called, The Two Ronnies, which lasted from 1971-1987, where the pair performed sketches and musical numbers with a satirical flair. Outside of The Two Ronnies, he is also well-known for his portrayal of Timothy Lumsden, in the sitcom Sorry!. Corbett appeared in a number of advertisements and has also made cameo appearances in shows like Extras, Little Britain Abroad, and Piers Morgan's Life Stories. He also hosted the show Strictly Come Dancing and was a panelist in the BBC 1 comedy show, Would I Lie to You? . In 2012, Corbett was appointed Commander of the Order of the British Empire (CBE) for services to entertainment and charity. He was married to actress and dancer, Anne Hart, since 1965 and the couple had two daughters who are also actresses, Emma and Sophie Corbett. Sadly their first child, Andrew, had a heart defect and died at only six weeks of age. Corbett lived in Shirley, Croydon, London for many years and also had a home in Scotland. He was a beekeeper and kept hives at his second home in Scotland.

He was also an avid golfer and appeared at celebrity and pro-am events. He was a supporter of his local football club, Crystal Palace, as well as his hometown club, Heart of Midlothian. Ronnie died on March 31, 2016 at the age of 85. 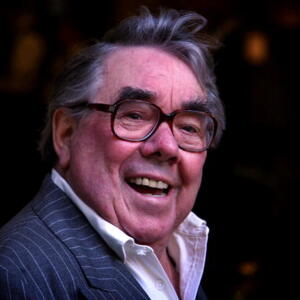