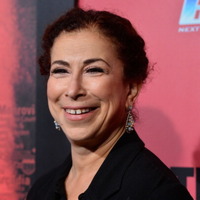 Roma Maffia Net Worth: Roma Maffia is an American actress who has a net worth of $1.5 million. Roma Maffia was born in Manhattan, New York in May 1958. She started off her acting career on stage Off-Broadway. Her film debuts came in the 1982 movies Stuck on You! and Smithereens. From 1994 to 1995 she starred as Angela Giandamenicio in the television series Chicago Hope. Roma starred as Grace Alvarez in the TV series Profiler from 1996 to 2000. From 2007 to 2008 she starred as Judge Victoria Peyton in the series Boston Legal. From 2003 to 2010 she starred as Dr. Liz Cruz in the series Nip/Tuck. Since 2013 she starred as Linda Tanner on the TV series Pretty Little Liars. Maffia has also starred in the movies Married to the Mob, American Blue Note, The Paper, Disclosure, Nick of time, Eraser, Kiss the Girls, Double Jeopardy, Things You Can Tell Just by Looking at Her, The New Women, I Am Sam, Treading Water, Holes, Ghost Image, Yonkers Joe, The Blue Tooth Virgin, Kingshighway, and As High as the Sky. She has also appeared in episodes of the TV series The Equalizer, The Young Indiana Jones Chronicles, Courthouse, Wings, Welcome to Paradox, The West Wing, Gideon's Crossing, The Division, Ally McBeal, ER, Judging Amy, Tania, For the People, The Sopranos, CSI: Crime Scene Investigation, Boomtown, Century City, Strong Medicine, Ghost Whisperer, Criminal Minds, Eastwick, Dexter, Medium, Off the Map, Reed Between the Lines, The Event, NCIS, and Drop Dead Diva.