Rodrigo Santoro Net Worth: Rodrigo Santoro is a Brazilian actor who has a net worth of $10 million. Rodrigo Santoro was born in Petropolis, Rio de Janeiro state, Brazil in August 1975. He studied journalism and entered the Actor's Workshop of Rede Globo. Santoro starred in many of Globo's telenovelas including Olho no Olho, Patria Minha, Explode Coracao, O Amor Esta no Ar, Suave Veneno, and Mulheres Apaixonadas.

Santoro started acting in English films in 2001 with Brainstorm and Behind the Sun. In 2003 he starred in the movies Charlie's Angels: Full Throttle as Randy Emmers and Love Actually as Karl. In 2006 Santoro starred as Xerxes in the movie 300. He also starred as Paulo in the TV series Lost from 2006 to 2007. In 2009 he starred as Jimmy Kemple in the film I Love You Phillip Morris. He provided the voice of Tulio in the 2011 film Rio and starred as Alex in 2012's What to Expect When You're Expecting. In 2013 he starred as Frank Martinez in The Last Stand. In 2014 Santoro starred in the movie 300: Rise of an Empire as Xerxes and again provided the voice of Tulio in Rio 2. Santoro has won an ACIE Award, Brazilia Festival of Brazilian Cinema Awards, Cannes Film Festival Chopard Trophy, Golden India Catalinas at the Cartagena Film Festival, Cinema Brazil Grand Prize, Best Actor at the Havana Film Festival and Lima Latin American Film Festival, and more. 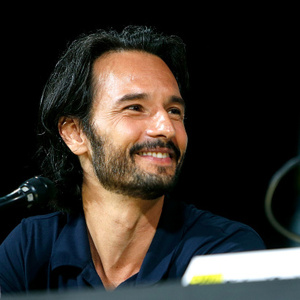