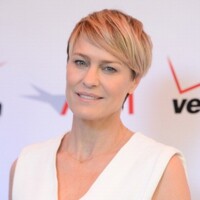 What is Robin Wright's net worth and salary?

Robin Wright is an American actress who has a net worth of $65 million dollars. Robin first garnered recognition for her role on the daytime soap opera "Santa Barbara." On the big screen, she has drawn acclaim for her performances in films such as "The Princess Bride," "Forrest Gump," "Unbreakable," and "Nine Lives." Wright also starred on the Netflix political drama "House of Cards," for which she won a Golden Globe Award for Best Actress.

In 2011, Robin Wright divorced fellow actor Sean Penn and reportedly received half of his fortune in the settlement. It's estimated that the settlement was $40 million.

At the peak of the series, Robin Wright earned $9 million per season for her work on "House of Cards."

Robin Wright was born in 1966 in Dallas, Texas. Her mother, Gayle, was a cosmetics saleswoman, while her father, Freddie, worked at a pharmaceutical company. Wright was brought up in San Diego, California, where she attended La Jolla High School. Later, she went to Taft High School in the Woodland Hills area of Los Angeles.

When she was 14, Wright began her professional career as a model. A few years later, in the early 1980s, she appeared in two episodes of the soap opera "The Yellow Rose." This was followed by her breakthrough role as Kelly Capwell on the soap opera "Santa Barbara," which ran from 1984 to 1988. Starring in 538 episodes of the program, Wright received multiple Daytime Emmy Award nominations for her youth performance.

In 1986, Wright transitioned to feature films with a part in "Hollywood Vice Squad." The next year, she had her breakthrough movie role in the fantasy adventure comedy "The Princess Bride," in which she played Princess Buttercup opposite Cary Elwes. Following this, in the early 90s, Wright starred in the drama "Denial"; the crime film "State of Grace," with Sean Penn and Ed Harris; the Irish film "The Playboys," costarring Albert Finney and Aidan Quinn; and the fantasy comedy "Toys," with Robin Williams. Wright's most critically acclaimed performance yet came in 1994, when she starred as Jenny Curran, the love interest of Tom Hanks' character, in the Best Picture Oscar winner "Forrest Gump." For her work, she received Golden Globe and Screen Actors Guild nominations for Best Supporting Actress.

In 1995, Wright appeared in "The Crossing Guard," a drama directed by Sean Penn. The following year, she starred in the lead role of the film adaptation of "Moll Flanders," earning a Satellite Award nomination for Best Actress in a Drama. Further awards success followed with "Loved," for which she received an Independent Spirit Award nomination, and the romantic drama "She's So Lovely," for which she was nominated for another Screen Actors Guild Award. Wright closed out the decade with roles in "Hurlyburly" and "Message in a Bottle."

Wright began the 2000s with parts in the black comedy "How to Kill Your Neighbor's Dog" and the superhero thriller "Unbreakable," in which she costarred with Bruce Willis and Samuel L. Jackson. Subsequent credits included Sean Penn's "The Pledge," the drama "White Oleander," musical crime comedy "The Singing Detective," the drama "Virgin," and "A Home at the End of the World," costarring Colin Farrell. In 2005, Wright had two critically lauded performances, in the films "Sorry, Haters" and "Nine Lives." The latter, which featured a large ensemble of actors including Holly Hunter, Amanda Seyfried, Sissy Spacek, Glenn Close, and Ian McShane, garnered Wright multiple awards nominations. Among Wright's other films in the 2000s were "Breaking and Entering," "Hounddog," "Beowulf," "What Just Happened," "State of Play," and "The Private Lives of Pippa Lee," based on the novel of the same name. 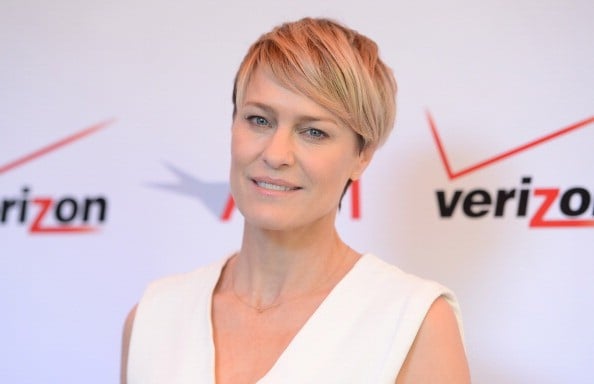 In the early 2010s, Wright had parts in "The Conspirator," the Brad Pitt baseball film "Moneyball," the drama "Rampart," and the psychological crime thriller "The Girl with the Dragon Tattoo," an adaptation of the popular book. In 2013, she was in the romantic drama "Adore," and played a version of herself in the live-action/animation hybrid "The Congress." Subsequent credits have included "A Most Wanted Man," "Everest," "Wonder Woman," "Blade Runner 2049," and "Zack Snyder's Justice League." In 2021, Wright made her feature directorial debut with the drama "Land," in which she also starred in the leading role.

Television and "House of Cards"

After 17 years away from television, Wright made her return to the small screen in the 2005 HBO miniseries "Empire Falls." For her performance, the actress received her third Screen Actors Guild nomination. However, Wright's largest and most acclaimed television role came eight years later, when she began starring opposite Kevin Spacey on the Netflix drama "House of Cards." Playing Claire Underwood, the cutthroat wife of protagonist Frank Underwood, Wright earned numerous accolades, including multiple Emmy, SAG, and Golden Globe nominations. In 2014, she won the Golden Globe, making her the first actress to win for a streaming television series.

In 2017, after costar Kevin Spacey was fired from "House of Cards" due to allegations of sexual misconduct, Wright was made the new lead of the program. Her last appearance as Claire Underwood on the show's sixth and final season was highly acclaimed, garnering her yet more nominations from the Screen Actors Guild and Emmy Awards.

In 1986, Wright wed actor Dane Witherspoon, whom she had met earlier on the set of "Santa Barbara." The two divorced in 1988. The next year, Wright started seeing actor Sean Penn, who had just divorced Madonna. Wright and Penn married in 1991, and subsequently had a daughter, Dylan Frances, and a son, Hopper Jack. However, their relationship was on and off, and a divorce was finalized in 2010. In 2012, Wright began dating actor Ben Foster; although they were engaged twice, they never wed. Later, in 2018, Wright was betrothed to Saint Laurent executive Clément Giraudet.

An avid philanthropist, Wright is the honorary spokesperson of the nonprofit The Gordie Foundation, which works to help young people deal with and prevent risks associated with alcohol consumption. Wright is also a human rights activist in the Democratic Republic of the Congo, and has done much advocacy about issues in the nation.