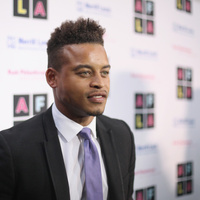 Robert Ri'chard net worth: Robert Ri'chard is an American actor who has a net worth of $400 thousand dollars. Robert Ri'chard was born in Los Angeles, California, and began his professional on-camera career in the mid-90s, appearing on the show "Where I Live". Since then, he was worked steadily, appearing in such film and television projects as "Hangin' with Mr. Cooper", "Nash Bridges", "Light It Up", "Crisis Center", "The Jamie Foxx Show", "Once and Again", "The Feast of All Saints", "Boston Public", "Touched by an Angel", "My Wife and Kids", "Who's Your Daddy", "CSI: Miami", "NCIS", "Vampire Diaries", "The Client List", and "CSI: NY". He is most widely recognized for his co-starring and recurring roles on such shows as "Cousin Skeeter" (voice), "One on One", "Veronica Mars", and "Meet the Browns", as well as for his work in the films "House of Wax" and "Coach Carter". His cartoon character Bobby, from "Cousin Skeeter", was also a regular contestant on Nickelodeon's "Figure It Out".