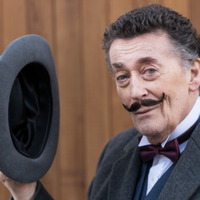 Robert Powell net worth: Robert Powell is an English actor who has a net worth of $12 million. Robert Powell was born in Salford, England in June 1944. In 1970 he starred as Tobias Wren in the television series Doomwatch. Powell starred as Richard Hannay in the TV series Hannay from 1988 to 1989. From 1993 to 1997 he starred as Dave Briggs in the series The Detectives. Powell starred as Mark Williams in the television series Holby City from 2005 to 2011. He has served as a narrator often thanks to his distinctive voice, including in the 2013 TV mini-series documentary The Bible. Powell starred as Jesus Christ in the 1977 TV mini-series Jesus of Nazareth. He has starred in several films including Pride of Africa, The Hunchback of Notre Dame, The Survivor, Pygmalion, Harlequin, Tommy, and The Italian Job. Powell was nominated for a BAFTA Awards for Best Actor for Jesus of Nazareth in 1978.