Robert LaSardo net worth: Robert LaSardo is an American actor who has a net worth of $500 thousand. Robert LaSardo was born in Brooklyn, New York in September 1963. He studied at the High School of Performing Arts and the Stella Adler Studio of Acting. LaSardo served in the U.S. Navy for four years and handled Navy attack dogs.

He has over 100 acting credits to his name starting with the movie China Girl in 1987. From 2006 to 2007 he starred as Mateo in the soap opera General Hospital. LaSardo has had recurring roles in the TV series China Beach, Renegade, NYPD Blue, Sex, Love & Secrets, Nip/Tuck, CSI: Miami, In Plain Sight, and Bad Samaritans. He has also starred in the movies Short Circuit 2, Renegades, Hard to Kill, King of New York, Out for Justice, Gang Related, In Too Deep, Blue Streak, Bubble Boy, Dirty, Half Past Dead 2, Autopsy, Death Race, Tortured, Tomorrow You're Gone, and The Human Centipede 3 (Final Sequence). LaSardo is recognized for his extensive tattoos on his neck, chest, and arms. He is often cast as a Latino character although he is Italian American. 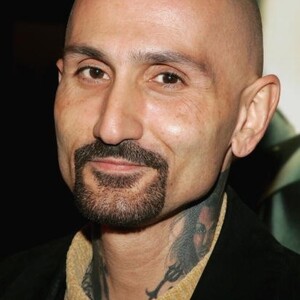