Robert Irwin net worth: Robert Irwin is an Australian television personality who has a net worth of $3 million. Robert Irwin was born in Buderim, Queensland, Australia in December 2003. He is best known for starring on the reality TV series Crikey! It's the Irwins starting in 2018. Robert Irwin hosted the TV series Wild But True for the Discovery Kids Channel.

He also co-created the Robert Irwin: Dinosaur Hunter book series. Robert Irwin has appeared on the Tonight Show more than 10 times. He appeared in the film Free Willy: Escape from Pirate's Cove in 2010 and voiced a role in the Australian version of the movie The SpongeBob Movie: Sponge Out of Water in 2015. Robert is the son of the late Steve Irwin as well as Terri Irwin. He is the brother of Bindi Irwin and the grandson of Bob Irwin. In 2013 he was nominated for a Logie Award for Most Popular New Male Talent. 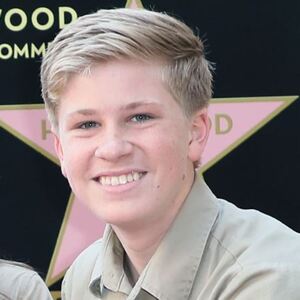