Robert Horton net worth: Robert Horton was an American actor and singer who had a net worth of $3 million. Robert Horton was born in Los Angeles, California in July 1924 and passed away in March 2016. As an actor he starred as Flint McCullough on the television series Wagon Train from 1957 to 1962. Horton starred as Shenandoah on the TV series A Man Called Shenandoah from 1965 to 1966. He appeared in several films including A Walk In The Sun, The  Tanks Are Coming, Return of the Texan, Apache War Smoke, Pony Soldier, Bright Road, Code Two, Arena, Prisoner of War, Men of the Fighting Lady, The Man Is Armed, The Green Slime, and more. He signed a contract with MGM Studios and also appeared on stage. In the 1960s he made two 45 RPM singles with Columbia Records. Horton later appeared on the soap opera As the World Turns. Horton received the Golden Boot Award in 2004. He was married three times including to Barbara Ruick. Robert Horton passed away on March 9, 2016 at 91 years old. 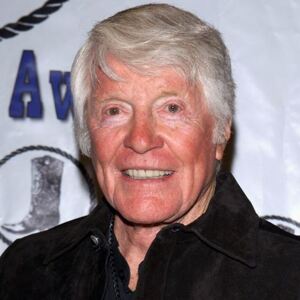