Rita Wilson Net Worth: Rita Wilson is an American-Greek actress, producer, and singer who has a net worth of $100 million dollars. It should be noted that Rita's net worth is mixed with the net worth of her husband, Tom Hanks. The couple's combined net worth is $400 million. Wilson began her professional acting career in the early 1970s with a guest-starring role on "The Brady Bunch," and she went on to a steady career in film and television. She has appeared in such projects as "The Bonfire of the Vanities" (1990), "Sleepless in Seattle"(1993), "Now and Then" (1995), "That Thing You Do!" (1996), " Runaway Bride" (1999), and the HBO series "Girls" (2013–2017). Rita produced the massively successful film, "My Big Fat Greek Wedding" (2002), which went on to become one of the highest grossing independent films of all time, and produced "Connie and Carla" (2004) and "Mamma Mia!" as well (2008). She has also released four studio albums and appeared on Broadway in "Chicago" in 2006.

Early Life: Rita Wilson was born Margarita Ibrahimoff on October 26, 1956, in Hollywood, California. She grew up in a Greek Orthodox household with a Greek mother, Dorothea, a Bulgarian father, Hassan, and two siblings, Lily and Chris. Hassan moved to the U.S. in 1949 and changed his last name to Wilson in 1960. Rita attended Hollywood High School and the London Academy of Music and Dramatic Art.

Rita helped playwright and actress Nia Vardalos secure a movie deal for "My Big Fat Greek Wedding," which grossed $368.7 million at the box office. Along with producing the film, Rita produced the sequel, 2016's "My Big Fat Greek Wedding 2," as well as a 2003 TV series, "My Big Fat Greek Life," and two stage productions. In 2006, Wilson starred as Roxie Hart in "Chicago" on Broadway, and she returned to Broadway in 2015, co-starring with Larry David in his play "Fish in the Dark." She has also appeared in off-Broadway productions of Nora and Delia Ephron's "Love, Loss and What I Wore," Daniel Margulies' "Dinner with Friends," and Lisa Loomer's "Distracted."

Singing Career: Rita released her debut album, "AM/FM," on May 8, 2012, and she has released three more since: "Rita Wilson" (2016), "Bigger Picture" (2018), and "Halfway to Home" (2019). In 2014, she performed for President Obama and First Lady Michelle Obama at the National Christmas Tree Lighting Ceremony and co-hosted the event. Wilson toured with Chicago in 2016, serving as the band's opening act, and in 2017, she put on "Liner Notes: Songwriters, Stories and Music with Rita Wilson and Friends" at L.A.'s Geffen Playhouse.

Philanthropy: Wilson and Hanks have been honorary co-chairs of the Women's Cancer Research Fund for more than 20 years. The couple also supports the Shakespeare Center of Los Angeles and hold an annual Simply Shakespeare event to raise funds for the center's programs that benefit underprivileged youth. In 2018, Rita and Tom received the USC Shoah Foundation's Ambassadors For Humanity award for their support of humanitarian causes and veterans, and in 2019, they earned honorary naturalization in Greece due to their contributions to victims of the Mati Fire. In April 2020, Wilson rapped on a remix of Naughty By Nature's "Hip Hop Hooray" to raise money for MusiCares COVID-19 Relief Fund.

Personal Life: Rita married Tom Hanks on April 30, 1988, and they welcomed son Chester (aka "Chet") on August 4, 1990, and son Truman on December 26, 1995. Wilson is also stepmother to Colin and Elizabeth, Tom's children from his marriage to Samantha Lewes. Rita first met Tom when she guest-starred on "Bosom Buddies" in 1981, but they didn't begin a relationship until they co-starred in 1985's "Volunteers." In 2015, Rita underwent a double mastectomy after being diagnosed with breast cancer, and in March 2020, Wilson and Hanks were diagnosed with Coronavirus while Tom was filming a movie in Australia. The pair was treated at Gold Coast University Hospital and returned to the U.S. at the end of the month.

Awards and Nominations: In 1999, Wilson won a Golden Satellite Award for Best Actress in a Supporting Role in a Miniseries or a Motion Picture Made for Television for her performance in "From the Earth to the Moon." In 2003, the Publicists Guild of America honored Rita, Tom, and producer Gary Goetzman with a Showmanship Award. That year, the Producers Guild of America gave "My Big Fat Greek Wedding" a Visionary Award and nominated Wilson, Hanks, and Goetzman for the Outstanding Producer of Theatrical Motion Pictures award. In 2008, Rita was nominated for an Orpheus Award for Best Short Film for "The Trap" at the Los Angeles Greek Film Festival, and the following year, she shared a National Board of Review award with her "It's Complicated" castmates. Wilson received a star on the Hollywood Walk of Fame in 2019, and in 2016, she was featured on a stamp by the Greek Postal Service ELTA.

Real Estate: In April of 1991, Tom and Rita bought a large oceanfront mansion in the uber-exclusive Malibu Colony for $2.95 million. The seller was director John Frankenheimer. Today this house is likely worth $20 million, if not more. In January 2010, Tom and Rita spent $26 million to acquire what would become their primary residence in the Pacific Palisades area of Los Angeles.

In May 2017, Tom and Rita sold two side-by-side homes in the Palisades for $18 million. The buyer demolished the two homes to make way for a very large single mansion. Tom and Rita own at least five other homes in the Pacific Palisades, and they own a ski house in Sun Valley, Idaho. In total, the Hanks/Wilson real estate asset portfolio is worth at least $150 million. 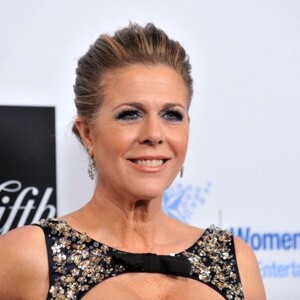