Rick Baker net worth: Rick Baker is an American special make-up effects creator who has a net worth of $3 million. Rick Baker was born in Binghamton, New York in December 1950. Baker is known for his creature effects. He graduated from the Academy of Art University and got his first job as an assistant to prosthetic makeup effects veteran Dick Smith working on the film The Exorcist.

Baker worked on the TV series Beauty and the Beast from 1987 to 1990. He has also worked in the makeup department for the movies King Kong, Star Wars: Episode IV – A New Hope, The Incredible Shrinking Woman, An American Werewolf in London, Thriller, Captain EO, Bigfoot and the Hendersons, Coming to America, Gorillas in the Mist, Ed Wood, Batman Forever, The Nutty Professor, Escape from L.A., Men in Black, How the Grinch Stole Christmas, Planet of the Apes, The Haunted Mansion, X-Men: The Last Stand, Norbit, TRON: Legacy, and more. As an actor he also appeared in the films Thriller, How the Grinch Stole Christmas, Planet of the Apes, Men in Black II, and Men in Black III. He played the title role of King Kong in the original film in 1976. Baker has won 26 awards and been nominated for 34 more. He has won seven Academy Awards for makeup and was awarded a star on the Hollywood Walk of Fame at 6764 Hollywood Blvd. in 2012. 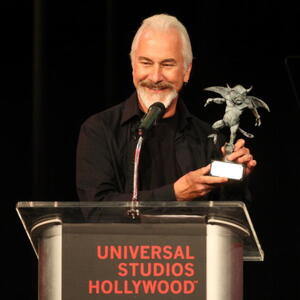