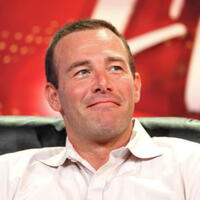 Richard Ruccolo Net Worth: Richard Ruccolo is an American actor who has a net worth of $2 million dollars. Born in 1972 in Marlton, New Jersey, Richard Ruccolo started acting in high school productions and moved to Los Angeles once he earned his diploma to pursue his show business dreams. Ruccolo began scoring small parts on TV series, including "The X-Files" and "Beverly Hills, 90210", and did commercial work for well-known brands such as 7 Up, Skittles, and Wendy's, in order to get his name out in Hollywood. In 1998, he landed a leading part on "Two Guys, a Girl, and a Pizza Place" as Pete Dunville until it was cancelled three years later. Following the show's end, Ruccolo was cast on "Missing in the USA", "Anacardium", "All Over the Guy", "The One", and "Joey". In 2008, he landed a starring role on "Rita Rocks", playing Jay Clemens for 40 episodes over two seasons. His other TV and film credits include "Desperate Housewives", "Crash & Bernstein", "It's Always Sunny in Philadelphia", "Reba", "Standoff", "Talk Show Diaries", "Less Than Perfect", "Music from Another Room", "A Nanny for Christmas", and "Luck of the Draw". Ruccolo was once engaged to "Saved by the Bell" star Tiffani Thiessen after they met on the set of a TV show. He later married Lauren Rees in 2008.