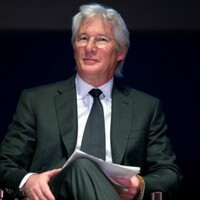 What is Richard Gere's Net Worth?

Richard Gere is an American actor who has a net worth of $120 million dollars. Richard Gere began his career in the 70s and is probably most widely recognized for his work in such films as "Pretty Woman", "An Officer and a Gentleman", and "Chicago". He has been nominated for multiple Golden Globe and SAG Awards, among other acting honors, and he also campaigns for human rights in Tibet.

Richard Gere is a versatile actor who has been long regarded as one of the most bankable leading men in Hollywood. He was born Richard Tiffany Gere on August 31, 1949, in Philadelphia, Pennsylvania. His mother, Doris Ann was a housewife and his father, Homer George Gere, worked as an insurance agent for Nationwide Mutual Insurance Company. Gere graduated from North Syracuse Central High School in 1967, where he had excelled at trumpet, music, and gymnastics. He went to the University of Massachusetts Amherst on a gymnastics scholarship and majored in philosophy, however, he left after two years and didn't graduate.

In his early days, Richard emerged as an up-and-coming talent in plays both on and off-Broadway. He first worked professionally in 1969 at the Seattle Repertory Theatre and at Cape Cod's Provincetown Playhouse. His first major theater role was in 1973, in the original West End in London stage version of Grease. Gere was one of the first Hollywood actors to portray a homosexual character when he starred as a gay Holocaust victim in Bent, a 1979 Broadway production. His performance earned him his first Theater World Award.

Gere began appearing in Hollywood films in the mid-to-late '70s. He was cast in 1974's The Lords of Flatbush in a starring role, but was replaced after fighting with his would-be co-star, Sylvester Stallone. He quickly garnered attention from roles in small films like the drama Looking for Mr. Goodbar (1977) and Terence Malick's Days of Heaven (1978). However, Gere really entered the limelight in 1980 for his role in the film American Gigolo, which established him as a leading man and a sex symbol. He further solidified his status as a top leading man starring in several hit films, including An Officer and a Gentleman starring opposite Debra Winger in 1982. Gere's role in both of these films shot him to superstardom when they grossed $130 million and earned him a Golden Globe nomination for Best Actor and a Screen Actor's Guild Award for being part of the Best Cast.

After a quiet decade in the eighties, Gere resurfaced with the release of Internal Affairs in 1990. That same year, Gere played high-powered businessman Edward Lewis opposite Julie Roberts in groundbreaking Pretty Woman. The film was enormously popular and a box office smash, and earned Richard his second Golden Globe nomination. Gere continued his success into the nineties with Sommersby, Primal Fear in 1996, and 1999's Runaway Bride. Later in 1999, Gere was named People magazine's Sexiest Man Alive. He began the new decade by appearing in hit films The Mothman Prophecies and co-starring with Diane Lane in Unfaithful (both 2002 releases). Later in 2002, Gere won his first Golden Globe Award when he starred in the musical film adaptation Chicago. Gere got to put his ballroom dancing skills to the test in 2004's drama Shall We Dance? The film went on to gross $170 million worldwide. His next big hit was in 2007's semi-biographical film I'm Not There, where he was one of six actors to portray a version of Bob Dylan. Gere teamed up with Diane Lane yet again in 2008's romantic drama Nights in Rodanthe, which was was a commercial hit (grossing $84 million worldwide), but widely panned by critics.

Nights in Rodanthe was Gere's most recent to have been produced by a major film studio. It has been said that Gere has been somewhat exiled from Hollywood due to his politics regarding China, which is an important financial resource for major studios. He has appeared in numerous independent features since. He earned his fourth Golden Globe nomination for 2012's indie film Arbitrage. He also made a notable departure from the type of character he usually depicts when he starred in Norman: The Moderate Rise and Tragic Fall of a New York Fixer in 2016. His portrayal of Norman Oppenheimer was called "consistently, completely fascinating" by RogerEbert.com.

Over a four-decade career, Richard Gere has maintained a consistent film presence, frequently surprising audiences with new surges of craft and charm. A multitalented and well-rounded performer, Gere is also an accomplished musician. He composed and performed the Pretty Woman piano theme, as well as a guitar solo in Runaway Bride. He also learned tap dance for his role in Chicago, and studied karate extensively for An Officer and a Gentleman.

Gere has also made headlines away from the cameras thanks to his high profile yet brief marriage to supermodel Cindy Crawford from 1991-1995, his spiritual convictions to Buddhism, and his political support for Tibet. He was in a relationship with Penelope Milford from 1971-1978. He had brief relationships with both Priscilla Presley and Kim Basinger in the mid-eighties. In November 2002, Gere married model and actress Cary Lowell. They have a son, Homer James Jigme Gere, born in February 2000. They divorced in 2013, in a highly contested court proceeding in the New York County Supreme Court. The case was settled in October 2016.

Gere married Spanish activist Alejandra Silva in early April 2018 and the two had a baby boy in February 2019. 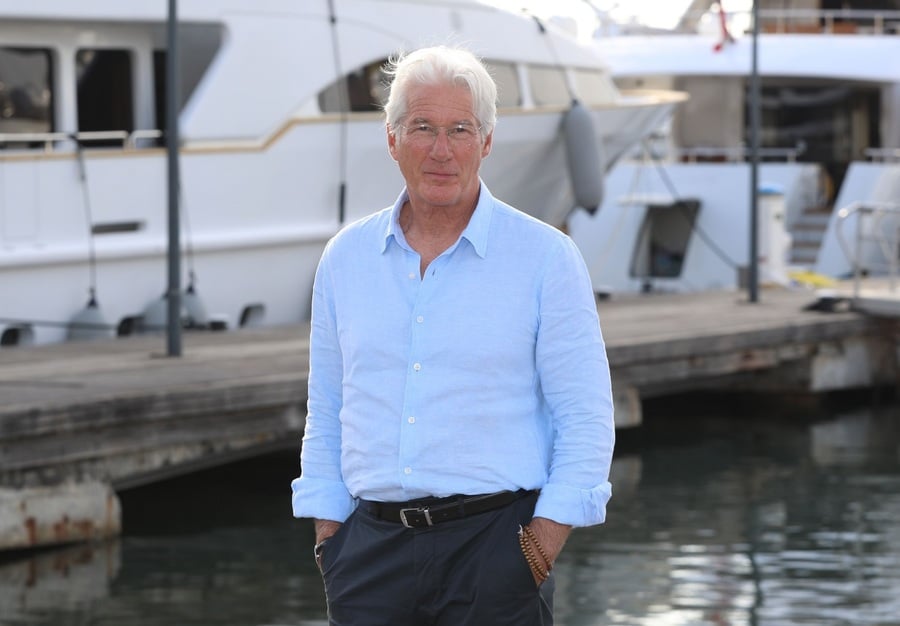 Gere, as previously mentioned, an advocate for human rights in Tibet. He is the co-found of Tibet House U.S., creator of the Gere Foundation and Chairman of the Board of Directors for the International Campaign of Tibet. He supports the Tibetan Independence Movement, therefore he is permanently banned from entering The People's Republic of China.

Gere supports Survival International, an organization that aims to protect the lands and rights of tribal peoples around the world. He wrote a book in 2009, We Are One: A Celebration of Tribal Peoples, and the royalties and sales from the book go to Survival International. Gere also campaigns for ecological causes as well as AIDS awareness. He helped establish AIDS Care Home, a residential facility in India for women and children living with AIDS. Richard created the Gere Foundation India Trust in 1999.

In 2016, Gere supported and campaigned for Hilary Clinton for president, and donated $2,700 to her campaign.

In 2005 Richard paid $6.9 million for a home in Sag Harbor, NY (in the Southampton), called Strongheart Manor. The 6-acre home has 300 feet of bay frontage and expansive lawns. Over the next few years he extensively renovated the property, primarily the 14,000 square-foot main house. In 2013 Richard listed the property for sale for $70 million. He lowered the price to $47.5 million, then ultimately accepted $36.5 million. The buyer was TV host Matt Lauer.

Richard's primary home is an incredible 50+ acre compound estate in Pound Ridge, New York. He originally bought the property in 1987 for $1.5 million. In January 2022 Richard listed this estate for sale for $28 million. In June 2022 he accepted an offer of $24.15 million for this property.

Not too far from his former former 50-acre compound, Richard co-owns the Bedford Post Inn.

In 2020 Richard and his wife Silva paid $10.5 million over two transactions (one of the transactions was $9.8 million) to put together a new 35-acre estate in the New York town of North Salem.

He also owns an apartment in New York City.