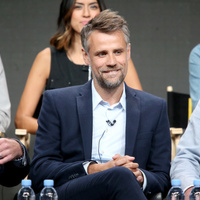 Richard Bacon Net Worth: Richard Bacon is a British television and radio presenter who has a net worth of $5 million. Richard Bacon was born in Mansfield, Nottinghamshire, England in November 1975. Bacon is best known for being the host of Blue Peter from which he was fired in 1998. He then worked as a reporter and presenter on many television shows including The Big Breakfast. Bacon also worked on radio stations including Xfm London and Capital FM. He began presenting on BBC Radio 5 Live in 2010. He also started hosting his own late night comedy show Beer & Pizza Club on ITV4. Bacon started hosting the ITV game show Show Me the Telly in 2013. It was announced in July 2014 that Bacon would be leaving 5Live. He has also appeared on the TV series Liquid News, Top of the Pops, The Law of the Playground, The Most Annoying Pop Songs…. We Hate to Love, The Wright Stuff, Something for the Weekend, Young Voters' Question Time, and Have I Got News for You.