Richard Attenborough Net Worth: Richard Attenborough was an English actor, director, producer, and entrepreneur who had a net worth of $20 million dollars. Born in 1923 in Cambridge, Cambridgeshire, England, Richard Attenborough served in the Royal Air Force during World War II. He made his show business debut on stage with Leicester's Little Theatre and his movie debut in 1942's "In Which We Serve". By 1949, he was one of the top ten most popular British actors at the box office with appearances in "London Belongs to Me", "Brighton Rock", and "Morning Departure". Attenborough is most famous for his roles in "The Great Escape", "Miracle on 34th Street", "10 Rillington Place", and "Jurassic Park". He is also an award-winning director responsible for films such as "Oh! What a Lovely War", "Young Winston", "A Bridge Too Far", "Gandhi", "A Chorus Line", "Cry Freedom", and "Shadowlands". He is a two-time Oscar winner for "Gandhi" and won three Golden Globes and four BAFTAs. He worked as president of the Muscular Dystrophy campaign, is the patron of the United World Colleges movement, and is an enthusiastic education activist. He directed the Chelsea Football Club from 1969 until 1982. Attenborough and his wife, Sheila Sim, have been married since 1945. In recent years, Attenborough has suffered from declining health, receiving a pacemaker and enduring a stroke. In 2011, his brother David announced that Attenborough was now in a wheelchair, and his career as a director was over. 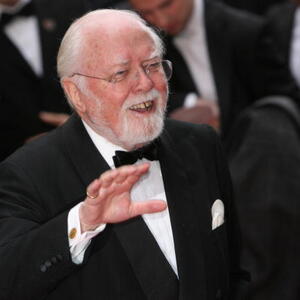