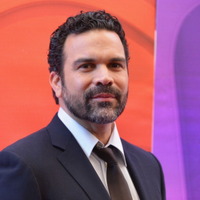 Ricardo Antonio Chavira Net Worth: Ricardo Chavira is an American actor who has a net worth of $3 million dollars. Born in Austin, Texas, in 1971, Ricardo Chavira studied at the University of the Incarnate World before earning his undergrad degree from the University of California San Diego and later his MFA from the school's Professional Actor Training Program. In 2004, Chavira landed the role for which he is best known today, as Carlos Solis on the hit TV series "Desperate Housewives". Chavira played Eva Longoria's husband on Wisteria Lane from 2004 until 2012. His other TV and film credits include "Six Feet Under", "The Division", "The Grubbs", "Joan of Arcadia", "City of Angels", "JAG", "NYPD Blue", and "24". He also appeared on several episodes of "Burn Notice" once "Desperate Housewives" concluded. Chavira has had a brief stage career, appearing in "Tracers", "Living Out", and "A Streetcar Named Desire". He has been married to his wife, Marcea Dietzel, since 2007, though they have been together for nearly two decades. They have two children together. Chavira actively supports breast cancer research after his mother succumbed to the disease. He has participated in several Races for the Cure with Susan G. Komen for the Cure and the Lee National Denim Day fundraiser.