Rhys Ifans net worth and salary: Rhys Ifans is a Welsh actor and musician who has a net worth of $12.5 million. Rhys Ifans has earned his net worth from his portrayal of characters such as Spike in Notting Hill and Jed Parry in Enduring Love and as a member of the Welsh rock groups Super Furry Animals and The Peth. Rhys was born on July 22, 1967 in Haverfordwest, Pembrokeshire, Wales. His mother Beti Wyn is a nursery school teacher, and Eirwyn Evans his father is a primary school teacher. During his youth he attended acting schools at Theatr Clwyd, Mold and trained at the Royal Scottish Academy of Music and Drama. He is well-known for his role in the movie Harry Potter and the Deathly Hallows-Part 1 in the role of Xenophilius Lovegood. Ifans will appear in the upcoming movie The Amazing Spider-Man in the role of Dr. Curt Connors/The Lizard. Ifans appeared as a presenter on the Welsh language TV channel S4C anarchic children's quiz programme Stwnsh. The programe aired in a total of 31 fifteen minute broadcasts, he has also appeared in several other Welsh language television programmes as well as performing at the Royal National Theatre, London and the Royal Exchange Theatre, Manchester. He won a BAFTA in 2005 for his portrayal of comedian Peter Cook in the TV film Not Only But Always. Rhys also made a guest appearance for the rock band Oasis for the video for their single "The Importance of Being Idle" Rhys accepted their award for Video Of the Year at the 2005/2006 NME Awards. Ifans was given an Honorary Fellowship, from Bangor University in North Wales, for his service to the film industry, on July 16, 2007. Llyr Evans Ifans's brother is also an actor; the siblings starred together in the Welsh produced film Twin Town. Rhys was engaged to actress Sienna Miller for a short time however the two ended their relationship in June of 2008. 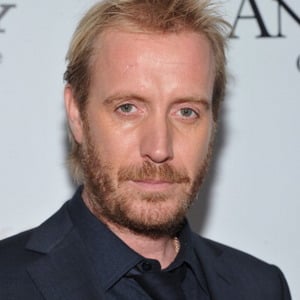