How much is Rhona Mitra Worth?

Rhona Mitra net worth: Rhona Mitra is an English actress, model and singer who has a net worth of $10 million dollars. Rhona Mitra was born in Paddington, London in 1976 where she attended, and claims to have been expelled from, two different boarding schools. She decided she wanted to be an actress at age nine when she met Judi Dench, who was the mother of one of her classmates. She began her career as a model, most prominently as the live action model for the Lara Croft Tomb Raider video game series in 1997 and 1998. Mitra is best known for her film and television roles on the sixth season of "Party of Five", the final season of the long-running drama "The Practice", the first two seasons of "Boston Legal", the third season of "Nip/Tuck", and as Sonja in "Underworld: Rise of the Lycans". She has also appeared in "Hollow Man", "Sweet Home Alabama", "Gideon's Crossing", "The Gates", "Ali G. Indahouse", "Stuck on You", Highwaymen", "Spartacus", "Shooter", "Doomsday", "The Number 23", "Skinwalkers", "Stolen Lives", SGU Stargate Universe", "Reuniting the Rubens", "Strike Back", and "The Last Ship". Rhona Mitra was ranked #46 on the Maxim Hot 100 Women of 2001. She continues to act and model to this day. 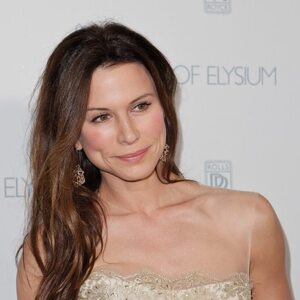