Rekha Ganesan Net Worth: Rekha Ganesan is an Indian actress who has a net worth of $40 million. Rekha Ganesan was born in Madras, Madras State, India in October 1954. She is often referred to as just Rekha and has mainly appeared in Hindi films. She has been noted as one of the best actresses in Hindi cinema.

In 1966 she stared out as a child actress in the Telugu film Rangula Ratnam. The film won the National Film Award for Best Feature Film in Telugu. Four years later Rekha got her lead acting debut in the film Sawan Bhadon. During her career Rekha has over 180 acting credits to her name. She is known for playing strong female characters and has also appeared in parallel cinema in Indian art house films. Rekha has won three Filmfare Awards including Best Supporting Actress once and Best Actress twice. She won the National Film Award for Best Actress for her role in 1981's Umrao Jaan. Rekha was honored with the Padma Shri by the Government of India in 2010. Some of her film titles include Double Cross, Dharma, Agreement, Mother, Censor, and Super Nani. In 2001 Rekha was awarded for her Significant Contribution to Indian Cinema at the Bombay International Film Festival. She also won the Special Award for Outstanding Contribution to Indian Cinema in 2012 at the Awards of the International Film Academy. 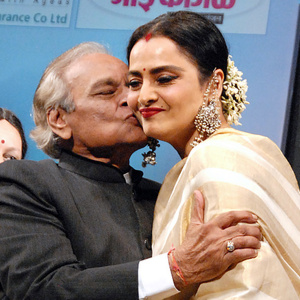