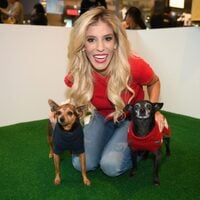 Rebecca Zamolo net worth: Rebecca Zamolo is an American social media personality and musician who has a net worth of $10 million. She is best known for her popularity on YouTube.

Rebecca Zamolo was born in Martinez, CA in September 1982. She has more than eight million subscribers on her self-titled YouTube channel and is also half of the Matt & Rebecca YouTube channel with her husband Matt Yoakum AKA Matt Slays. Zamolo studied at The Second City improv club. Rebecca Zamolo had a recurring role on the TV series The Late Late Show with Craig Ferguson in 2010. She has worked with content creators including Yahoo and Funny Or Die. Zamolo was a cheerleader for the Arena Football team the San Jose Sabercats. In 2019 she was nominated for a Streamy Award for Best Collaboration. She has also appeared in episodes of the TV series The Mumblesteens, The Flip Side, Minute Motivations, and more. In 2020 she purchased a mansion in Los Angeles, California for $4.6 million.