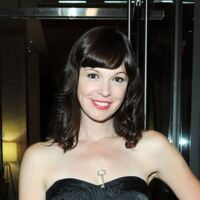 Rachel Wilson net worth: Rachel Wilson is a Canadian actress who has a net worth of $3 million. She is best known for starring on TV series such as Total Drama and Breaker High.

Rachel Wilson was born in Ottawa, Ontario, Canada in May 1977. She has more than 100 acting credits to her name starting in 1991. Wilson starred as Tamira Goldstein on the television series Breaker High from 1997 to 1998. She starred as Stella Bradley on the TV series Show Me Yours from 2004 to 2005. From 2007 to 2012 she starred as Heather on the series Total Drama. Rachel Wilson starred as Dr. Nikki Renholds on the television series Republic of Doyle from 2010 to 2014. She has appeared in several films including Anywhere but Here, Mystery, Alaska, The Glass House, Saw 3D, In the Tall Grass, and more. From 2018 to 2019 she had a recurring role as Iris on the TV series Impulse.