How much is Quvenzhane Wallis Worth?

Quvenzhane Wallis net worth: Quvenzhane Wallis is an American actress and author who has a net worth of $500 thousand. She is perhaps best known for starring in the movies Beasts of the Southern Wild and Annie.

Quvenzhane Wallis was born in Houma, Louisiana in August 2003. She has authored the books Shai & Emmie Star in Break an Egg!, A Night Out with Mama, Shai & Emmie Star in Dancy Pants!, and Shai & Emmi Star in To the Rescue!. Wallis starred as Kyra on the television Black-ish in 2019. She starred as Hushpuppy in the movie Beasts of the Southern Wild in 2012. Quvenzhane Wallis starred as Margaret Northup in the film 12 Years a Slave in 2013. She voiced the role of Almitra in the 2014 film The Prophet. Wallis starred as the title character in the 2014 movie Annie and as Lucy in the 2015 film Fathers & Daughters. She voiced the role of Harper in the 2016 movie Trolls. Quvenzhane Wallis was nominated for an Academy Award in 2013 for Beasts of the Southern Wild, becoming the youngest ever nominee for Best Performance by an Actress in a Leading Role. 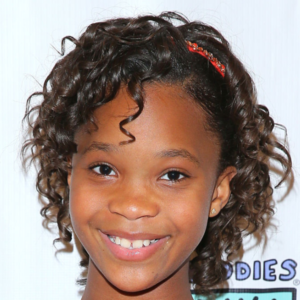