Prunella Scales Net Worth: Prunella Scales is an English actress who has a net worth of $2 million. Born in 1932 in Sutton Abinger, Surrey, England, Prunella Scales is best known for her comedy work throughout her show business career. After appearing in "Room at the Top", "Pride and Prejudice", and "Hobson's Choice" during the '50s, Scales' breakthrough role came on TV series "Marriage Lines" during the early '60s with Richard Briers.

She also appeared on several BBC Radio 4 shows such as "Ladies of Letters" and "Smelling of Roses". In the 1970s, Scales starred on "Fawlty Towers' as Basil Fawlty's wife, Sybil, until 1979. She earned a BAFTA Award nomination for her work in "A Question of Attribution" as Queen Elizabeth II. Her other TV and film credits include "The Merry Wives of Windsor", "What the Butler Saw", "The Lonely Passion of Judith Hearne", "The Boys from Brazil", "Children in Need", "The Shell Seekers", "Horrid Henry: The Movie", and "Seven of One". Scales endorsed supermarket Tesco in TV ads for about a decade alongside Jane Horrocks. In 2003, she focused heavily on stage productions, starring in a one-woman show, "An Evening with Queen Victoria", and playing Magpie in the opera "La gazza ladra". Scales has appeared in several political broadcasts for the Labour Party. Her biography, "Prunella", hit bookshelves in 2005, she works as an ambassador to the charity SOS Children's Villages, and is a patron of World Orphan week. Scales is fluent in French and has two children with her husband, Timothy West. In early 2014, her husband revealed that Scales is battling Alzheimer's. 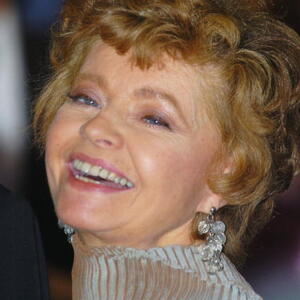