Preity Zinta Net Worth: Preity Zinta is an Indian actress who has a net worth of $10 million. Born in 1975 in Shimla, Himachal Pradesh, India, Preity Zinta earned her degree in English from St. Bede's College, Shimla, before graduating with a post-grad degree in criminal psychology. Soon after, Zinta began modeling and landed her first TV commercial for promoting chocolate.

In 1998, she made her film debut in "Dil Se.. alongside Manisha Koirala and Shahrukh Khan. She appeared in several other films before her breakthrough role in 2000's "Kya Kehna". Zinta earned a Filmfare Award Best Actress nomination for her portrayal of teen single mom Priya Bakshi in the film. By 2003, she was one of Bollywood's most sought after actresses. She starred in the country's three top grossing movies of the year: "Kal Ho Naa Ho" as Naina Catherine Kapur, "The Hero: Love Story of a Spy" as Reshma, and "Koi…Mil Gaya" as Nisha. A year later, she won Best Actress in a Leading Role at the 2004 Aspara Film & Television Producers Guild Awards for "Kal Ho Naa Ho". She has been nominated for ten Filmfare Awards, winning two of them. Zinta was also nominated for an international Genie Award in 2008 for Best Performance by an Actress in a Leading Role for "Heaven on Earth". Her other TV and film credits include "Salaam Namaste", "Kabhi Alvida Naa Kehna", "Heroes", "Om Shanti Om", "and "Jhoom Barabar Jhoom". Zinta is a popular social activist and TV presenter who pens columns for BBC News Online. She founded a production company called PZNZ Media and has been involved in several prominent court cases in her native country, including the Bharat Shah case. 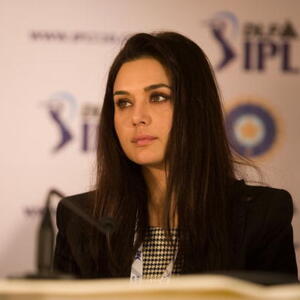