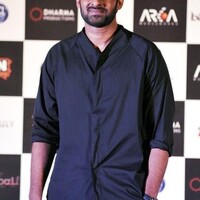 Prabhas Raju Uppalapati net worth: Prabhas Raju Uppalapati is an Indian film actor who has a net worth of $15 million. Prabhas Raju Uppalapati was born in Film Nagar, Hyderabad, India. He works exclusively in Telugu cinema and is the nephew of actor Uppalapati Krishnam Raju. Prabhas made his debut in the 2002 movie Eshwar. He has starred in several box office hits including Varsham in 2004, Chatrapathi in 2005, Chakram in 2005, Billa in 2009, Mr. Perfect in 2011, Mirchi in 2013, and Baahubali: The Beginning in 2015. Prabhas starred in the Bollywood movie Action Jackson in 2014. He has been nominated for Filmfare Awards South Awards for Best Actor in 2012 for Mr. Perfect and in 2014 for Mirchi.