Poppy Montgomery net worth and salary: Poppy Montgomery is an Australian actress who has a net worth of $8 million. She was born Poppy Petal Emma Elizabeth Deveraux Donahue in Sydney, New South Wales, Australia. Poppy Montgomery followed her then-boyfriend to the United States in the early 90s. She began her professional career with guest starring roles on television, including such shows as "Silk Stalkings", "Party of Five", "NYPD Blue", and "Relativity". She also played supporting roles in such films as "Devil in a Blue Dress", "Dead Man on Campus", and "The Other Sister".

Growing up in her native town in Sydney, Montgomery had an obsession with Marilyn Monroe from the age of 12. She always hated school and by the age of 15, Montgomery was expelled from six different private schools. Since she did not take a liking to education, Montgomery opted for a career in stage acting.

At the age of 18, Montgomery emigrated on America. Without a penny to her name, she arrived at Los Angeles to jump start her career. While staying with two friends of her brother's, a persistent Montgomery contacted Bob McGowan, former agent of Julia Roberts, every day – and she didn't stop until he took notice. The daily contact finally paid off as McGowan signed her.

Montgomery started climbing the acting ladder when she appeared in several minor roles in the late nineties, including the popular TV series, NYPD Blue before snapping up her first lead role, portraying her idol Marilyn Munroe in the mini-drama series, Blonde. The mini-series was based on a novel by Joyce Carol Oates.

The best is yet to come for the then-budding actress: Out of over 100 women, Montgomery picked to star in the popular CBS TV series, Without a Trace which ended in 2009. Montgomery also starred in another CBS TV series, Unforgettable, portraying Carrie Wells, a former New York detective who has a rare medical condition that gives her the ability to remember everything. Montgomery completed filming a biographical film, Magic Beyond Words. She portrays the J.K. Rowling, the brains behind Harry Potter. Montgomery is currently in a relationship with American actor Adam Kaufman. The couple have a son named Jackson Phillip Kaufman. 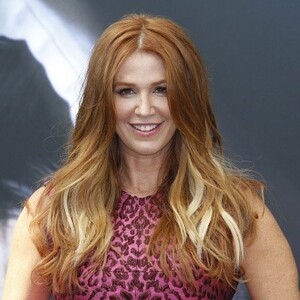