What was Peter Sellers' Net Worth?

Peter Sellers was born Richard Henry Sellers on September 8, 1925, in Portsmouth, England. His parents, Agnes (better known as Peg) and William, were variety entertainers, and they called Sellers "Peter" in honor of stillborn older brother. Sellers made his stage debut at just 2 days old when Dick Henderson carried him onstage at the Kings Theatre in Southsea. As a child, Peter traveled with his parents as they traveled the vaudeville circuit, and in 1935, they moved to North London. Sellers attended St Aloysius' College, a Roman Catholic school, though his mother was Jewish and his father was Protestant. He did well in school, where he excelled in drawing. During his youth, Peter also attended Miss Whitney's School of Dancing and Madame Vacani's Dancing Classes. St. Aloysius College's students were evacuated to Cambridgeshire after World War II began, but Peg didn't let Peter go, so at age 14, his formal education ended.

The family moved to Ilfracombe in North Devon in 1940, and Sellers started working at the Victoria Palace Theatre, which was managed by his aunt. He worked as a caretaker, usher, box office clerk, lighting operator, and assistant stage manager while employed at the theatre, and he befriended Derek Altman, who formed the stage act Altman and Sellers with him. Peter also began playing drums after finding Joe Daniels and His Hot Shots' drum set backstage, and he eventually played drums for several touring bands. Sellers later joined the Entertainments National Service Association, an organization that performed for British forces during the war, and he did comedy routines, sang, and played ukulele. In 1943, he enlisted in the Royal Air Force and was accepted into the RAF Gang Show troupe. Peter later served in France and Germany after the war ended.

After returning to England, Sellers auditioned for the BBC and appeared on the TV show "New To You" in 1948. He later called BBC radio producer Roy Speer, pretending to be "Much-Binding-in-the-Marsh" star Kenneth Horne and recommended himself to the producer. Impressed by Peter's acting, Speer let him appear on "Show Time," and Sellers soon became a regular radio performer. From 1951 to 1960, Peter voiced several characters on "The Goon Show," which has been described as "probably the most influential comedy show of all time." The Goons appeared in the 1951 film "Penny Points to Paradise," followed by 1952's "Down Among the Z Men." Sellers appeared in the film "Orders Are Orders" (1954), "The Ladykillers" (1955), "The Smallest Show on Earth" (1957), "The Naked Truth" (1957), and "The Mouse That Roared" (1959), and he won a BAFTA Award for 1959's "I'm All Right Jack." He co-starred with Sophia Loren in 1960's "The Millionairess," and the two released the album "Peter & Sophia" and the singles "Goodness Gracious Me" and "Bangers and Mash."

Peter earned a Golden Globe nomination for his performance as Clare Quilty in 1962's "Lolita" and an Academy Award nomination for playing Dr. Strangelove, Group Captain Lionel Mandrake, and President Merkin Muffley in 1964's "Dr. Strangelove or: How I Learned to Stop Worrying and Love the Bomb." In 1963, he starred as Inspector Jacques Clouseau in the Blake Edwards-directed comedy "The Pink Panther," and he reprised his role in "A Shot in the Dark" (1964), "The Return of the Pink Panther" (1975), "The Pink Panther Strikes Again" (1976), and "Revenge of the Pink Panther" (1978). Sellers starred in "What's New Pussycat?" (1965), the James Bond film "Casino Royale" (1967), and "The Party" (1968), and he co-starred with Goldie Hawn in the 1970 romantic comedy "There's a Girl in My Soup."

Peter played The March Hare in "Alice's Adventures in Wonderland" (1972), then he won a Tehran Film Festival Award for Best Actor for 1973's "The Optimists of Nine Elms." He appeared in "Soft Beds, Hard Battles" (1974), "Murder by Death" (1976), and "The Prisoner of Zenda" (1979), and he portrayed Queen Victoria in the 1974 comedy "The Great McGonagall." In 1979, he starred as Chance in the critically-acclaimed film "Being There," which earned him several awards, including a Golden Globe. In 2015, the film was preserved in the Library of Congress' National Film Registry for being "culturally, historically, or aesthetically significant." Sellers' final film was 1980's "The Fiendish Plot of Dr. Fu Manchu," and shortly before his death, he filmed several commercials for Barclays Bank. 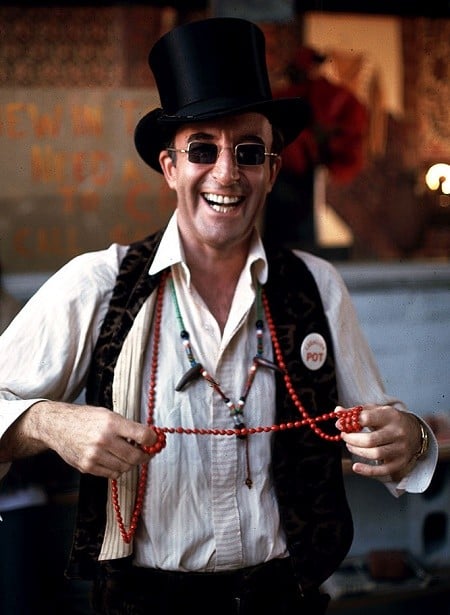 In April 1964, Peter inhaled amyl nitrites in order to have "the ultimate orgasm" and subsequently had eight heart attacks over a three-hour period. After Sellers and Ekland divorced in 1968, he married model Miranda Quarry on August 24, 1970, and they divorced four years later.

Peter then wed actress Lynne Frederick on February 18, 1977, and though their relationship reportedly soured near the end of Sellers' life, they were still married at the time of his death. In March 1977, Peter had a major heart attack and was fitted with a pacemaker, and in April 1980, Peter collapsed in Dublin as a result of his heart problems. Two days later, he attended the Cannes Film Festival against his doctors' advice and became ill again. His friends urged him to seek further treatment, so Sellers made an appointment for July 30th at L.A.'s Cedars-Sinai Medical Center, intending to undergo an angiogram and find out if he was a candidate for open-heart surgery.

On July 22, 1980, Sellers collapsed in a London hotel room shortly before he was scheduled to attend a reunion dinner with his former "Goon Show" co-stars Spike Milligan and Harry Secombe. Peter died of a heart attack at Middlesex Hospital, London on July 24th at the age of 54. A private funeral took place on July 26th at Golders Green Crematorium, followed by a memorial service on September 8th (Sellers' birthday) at St Martin-in-the-Fields. Peter's "Pink Panther" co-star Burt Kwouk said of Sellers' death, "Peter was a well-loved actor in Britain … the day he died, it seemed that the whole country came to a stop. Everywhere you went, the fact that Peter had died seemed like an umbrella over everything."

Sellers had reportedly begun the process of excluding Lynne Frederick from his will at the time of his death, but she ended up inheriting nearly the entire estate, which was worth an estimated £4.5 – 5 million.

Metro-Goldwyn-Mayer attempted to continue the "Pink Panther" films after Sellers died, offering his role to Dudley Moore. After Moore turned the role down, the studio turned to director Blake Edwards, who refused to recast the part. In 1982, he released "Trail of the Pink Panther," which was made up of deleted scenes from "Return of the Pink Panther," "The Pink Panther Strikes Again," and "Revenge of the Pink Panther." ​This prompted Frederick to sue, alleging that the film was a breach of contract, and she was awarded $1 million as well as 1.36% of the film's gross revenue and 3.15% of the profits.

Lynne Frederick died in 1994. At that point her daughter Cassie Unger, a woman who was born four years AFTER seller died, inherited the assets and rights to his estate.

Sellers won a San Francisco International Film Festival Golden Gate Award for Best Fiction Short for "The Running Jumping & Standing Still Film" (1959), a San Sebastián International Film Festival award for Best Actor for "Waltz of the Toreadors" (1962), and an Evening Standard British Film Award for Best Actor for "The Return of the Pink Panther" (1977).  For "Being There," Sellers earned a National Board of Review Award for Best Actor, a Fotogramas de Plata for Best Foreign Performer (Mejor intérprete de cine extranjero), and a Special Achievement Award at the London Critics Circle Film Awards. Posthumously, the Online Film & Television Association inducted Peter into the OFTA Film Hall of Fame for Acting in 2018 and for Character (for Dr. Strangelove/Group Captain Lionel Mandrake/President Merkin Muffley) in 2021. 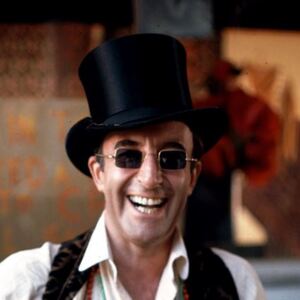