How much is Peter Sarsgaard Worth?

Peter Sarsgaard net worth: Peter Sarsgaard is an American film and stage actor who has a net worth of $20 million. Peter Sarsgaard has been acting since 1995 when he landed his first feature role in the movie Dead Man Walking. Three years after his screen debut, he starred in 1998 independent movies Another Day in Paradise and Desert Blue. The same year, Sarsgaard landed a substantial role in The Man in the Iron Mask portraying Raoul, the ill-fated son of Athos. He earned his first critical recognition for his performance in 1999's drama Boys Don't Cry as John Lotter. Then followed his first leading role in the 2001 film The Center of the World, after which he played supporting roles in 2002 films Empire, The Salton, as well as K-19: The Widowmaker. He went on to play in an eclectic range of films like the 2003 drama Shattered Glass, the 2004 comedy-drama Garden State, the biographical film Kinsey (2004), the drama The Dying Gaul (2005) as well as big-budget films such as Flightplan (2005), Jarhead (2005), Orphan (2009), Knight and Day (2010), and the superhero film Green Lantern (2011). Meanwhile, he made his Broadway debut with The Seagull in 2008 and has also appeared in numerous off- Broadway productions. In his off-screen and off-stage life, Sarsgaard is married to actress Maggie Gyllenhaal, with whom he has two daughters. 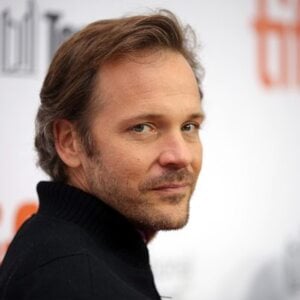