Peter Fonda Net Worth and Salary: Peter Fonda was an American actor, director, author and producer who had a net worth of $40 million at the time of his death in 2019. Fonda was an icon of the counterculture of the 1960s. His father was Henry Fonda. His sister is Jane Fonda. His children include actors Bridget Fonda and Justin Fonda. Peter Fonda died on August 16, 2019 at the age of 79 after a battle with lung cancer.

A significant player in the 1960s counterculture, he cowrote the screenplay for, and starred in, the 1969 independent classic "Easy Rider." Among his other movie credits are "The Hired Hand," "Two People," "Futureworld," and "Ulee's Gold."

Early Life and Career Beginnings: Peter Fonda was born in 1940 in New York City as the only son of legendary Hollywood actor Henry Fonda and mother Frances Ford Seymour. He had one older sibling, Jane, who was born three years prior, as well as a half-sister from his mother's first marriage. When Fonda was ten, Frances committed suicide at a mental hospital. Meanwhile, he attended the Fay School in Southborough, Massachusetts, and later matriculated to the Connecticut boarding school Westminster School, from which he graduated in 1958. After graduation, Fonda studied acting in his father's hometown of Omaha, Nebraska. There, he enrolled at the University of Nebraska, and was recruited by Marlon Brando's mother to join the Omaha Community Playhouse.

In 1960, Fonda returned to New York, where he joined the Cecilwood Theatre. He got work on Broadway, and garnered attention for his performance in "Blood, Sweat and Stanley Poole." Around this time, Fonda started guest starring on television shows such as "Wagon Train," "Naked City," and "The Defenders." In 1963, the actor landed his first film role in "Tammy and the Doctor," appearing opposite Sandra Dee. That year, he also had a supporting role in the World War II drama "The Victors," for which he won a Golden Globe Award for "New Star of the Year." Meanwhile, Fonda continued acting on television, showing up in everything from "The Alfred Hitchcock Hour" to "12 O'Clock High." In 1964, after starring in "Lilith" alongside Gene Hackman and Warren Beatty, Fonda got his first starring role in the romantic drama "The Young Lovers."

The Mid-60s and Counterculture: Following "The Young Lovers," Fonda grew a reputation as a nonconformist, distancing himself from the mainstream movie industry by wearing his hair long and making a routine of LSD consumption. During this time, the actor was known to take drugs with The Beatles and members of The Byrds; he was also involved in the 1966 Sunset Strip riot. The year of the riot, Fonda had his first countercultural film role in the Roger Corman movie "The Wild Angels," which helped inspire the "biker film" genre that flourished over the following decade. A success at the box office, the movie established the long-running association between Fonda and Harley-Davidson motorcycles.

In 1967, Fonda starred in another Roger Corman film, "The Trip," about the experience of taking LSD. The film, written by Jack Nicholson, also featured Dennis Hopper, Bruce Dern, and Susan Strasberg. Following this, Fonda went to France to star alongside his sister Jane in a segment of the omnibus horror movie "Spirits of the Dead."

"Easy Rider" and the 1970s: Fonda found his greatest artistic triumph yet in 1969, when he produced, cowrote, and starred in Dennis Hopper's independent road movie "Easy Rider." The film, which explored the social and political landscape of America in the 1960s, was a huge hit with audiences, becoming one of the most profitable films ever when it grossed $60 million on a budget of less than $400,000. For his part, Fonda received an Oscar nomination for Best Original Screenplay, shared with cowriters Dennis Hopper and Terry Southern.

Next, in 1971, Fonda appeared in the subversive Western drama "The Last Movie," also directed by Dennis Hopper. That same year, Fonda tried his hand at directing with a Western of his own called "The Hired Hand"; he also starred in the lead role. Later, in 1973, he directed the science fiction film "Idaho Transfer," and costarred with Lindsay Wagner in "Two People." Fonda took a turn for action roles in 1974, starting with his part in the car chase film "Dirty Mary, Crazy Larry." This was followed by further action movies including "Open Season," "Race with the Devil," "92 in the Shade," "Killer Force," and "Futureworld," a sequel to "Westworld." Fonda also reunited with Roger Corman on "Fighting Mad," which the latter produced. At the end of the decade, Fonda returned to directing with "Wanda Nevada," in which he also starred; the film is the only one to feature both Fonda and his father, Henry.

1980s and 1990s: Fonda appeared in a wide variety of films throughout the 1980s and 90s, on both big and small screens. On the latter, he received top billing for his role in the spy thriller "The Hostage Tower." In 1981, he was in the hit action comedy film "The Cannonball Run," playing a biker in homage to his earlier motorcycle movies. The next year, he costarred alongside James Woods and Karen Allen in "Split Image." Among Fonda's later 1980s credits were the Japanese film "Daijōbu, My Friend"; the horror films "Dance of the Dwarfs" and "Spasms"; the made-for-television movie "A Reason to Live"; the action drama "Certain Fury"; and "The Rose Garden," costarring Liv Ullman and Maximilian Schell.

Kicking off the 1990s, Fonda wrote and starred in the action film "Enemy." He subsequently starred in such films as "Family Express" and "South Beach," and then took supporting roles in independent films including "Deadfall," "Molly & Gina," and the vampire movie "Nadja." Following another supporting role in John Carpenter's "Escape from L.A.," Fonda had the greatest critical success of his career with his titular performance in 1997's "Ulee's Gold"; he received an Oscar nomination for Best Actor, and won the Golden Globe. The following year, Fonda garnered more critical acclaim for his role in the television film "The Passion of Ayn Rand," for which he won another Golden Globe Award.

2000s and Late Career: In the 2000s, Fonda appeared in films including "South of Heaven, West of Hell," "Wooly Boys," "The Heart is Deceitful Above All Things," and the remake of "3:10 to Yuma." Outside of movies, he lent his voice to an aging hippie character in the hit video game "Grand Theft Auto: San Andreas." In 2002, he was inducted into the AMA Motorcycle Hall of Fame.

Among Fonda's film credits in the 2010s were "The Trouble with Bliss," "Smitty," "Copperhead," "House of Bodies," "The Ballad of Lefty Brown," and "You Can't Say No." The actor's final two films, 2019's "The Magic Hours" and "The Last Full Measure," were released posthumously.

Personal Life: Fonda was wed three times. The first marriage was to Susan Brewer in 1961; they had two children, Justin and Bridget. The pair divorced in 1974. The following year, Fonda married Portia Rebecca Crockett; they divorced in 2011. Finally, the actor wed Margaret DeVogelaere, with whom he was with until his passing from lung cancer in 2019. 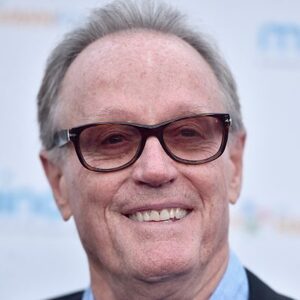