Pete Seeger was an American folk musician, songwriter, activist and television host who has a net worth of $5 million. Born in New York City, New York on May 3, 1919, Seeger had been active in the music and entertainment industries since 1939. He played banjo, guitar, the recorder, tin whistle, mandolin, piano, and ukulele. He was known for being a member of The Weavers and had several hits in the 1950s. He has been associated with The Almanac Singers, Woody Guthrie, Arlo Guthrie, Tao Rodriguez-Seeger, and Lead Belly. Seeger was described as a protest singer who performed in honor of environmental affairs, civil rights international disarmament, and counterculture. Some of his most prolific songs include "Turn! Turn! Turn!" and "Where Have All the Flowers Gone?" He was well known for his involvement in the American Civil Rights Movement as well as being one of the many folk singers to participate in the creation of "We Shall Overcome." Seeger was forced into boarding school in Ridgefield, Connecticut when he was a young boy, but he contracted scarlet fever and returned home just a few years later. When he was thirteen years old, he attend the Avon Old Farms Prep School and later attended Camp Rising Sun. When he was seventeen years old, he became a part of the Young Communist League and later became a member of the Communist Party USA. Seeger is prolific for his support of fellow folk artist, Bob Dylan and had a hand in pressing for Dylan's first LP on Columbia Records. Seeger is responsible for releasing nearly fifty records and compilations during his career. He received a Grammy Award in 2013 for Best Spoken Word Album for Pete Seeger: The Storm King; Stories, Narratives, Poems. He was associated with labels such as Folkways, Columbia, CBS, Vanguard, Sony Kids', and SME. Seeger died on January 27, 2014 in New York City, New York. 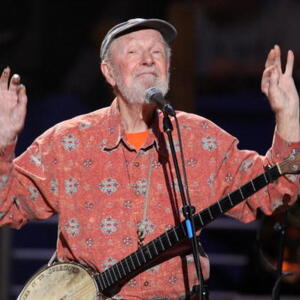